skip to main content
Return to Fordham University
You are at:Home»Faculty Profiles»Researcher Examines Link Between Masculinity and Mental Health

At the top of a long list of gender stereotypes is a central tenet: Real men don’t cry. 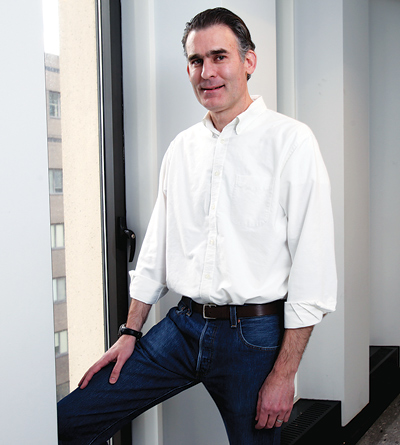 Daniel Coleman, Ph.D., is working to uncover the stereotypes that may contribute to the risk of suicide in men.
Photo by Bruce Gilbert

But unfortunately, such attitudes, as well as many other expectations that men feel they must live up to, can drive some to desperation.

Those are the attitudes that Daniel Coleman, Ph.D., is working to change. Coleman, an associate professor at the Graduate School of Social Service (GSS) with more than a decade of experience as a mental health counselor, has recently turned his focus to the area of suicide prevention.
Within that area, one group in particular seems to be crying out for help.

“It’s not a very widely known fact that 80 percent of suicide deaths in the United States are men,” Coleman said. “So the cutting edge in suicide research now is to understand why there is this gender discrepancy.”
Coleman’s foray into suicide research began at Portland State University in Oregon, where he taught for nine years before coming to Fordham last fall. There, he was the lead evaluator on Oregon’s Garrett Lee Smith Memorial Act Grant for youth suicide prevention. The $1.4 million Substance Abuse and Mental Health Services Administration (SAMHSA) grant provided suicide prevention services and allowed Coleman and his team to evaluate the program’s effectiveness.

During this time, Coleman began to explore the link between suicide and gender roles. It was already known among researchers that men tend to use more violent and thus more deadly means of suicide, such as guns or hanging. But the “why” behind this fact remained unclear. With two colleagues at Portland State, Coleman developed a theoretical model of traditional masculinity and suicide risk that was published in the International Journal of Men’s Health.
The model hypothesizes that men who adhere to more traditional masculine ideals are at a higher risk of suicide and other mental health problems.

“Traditional masculinity includes attitudes such as the beliefs that men should be leaders, should be in control of situations, should restrict their emotions and remain calm under stressful situations, shouldn’t cry or show emotions other than anger. In a way, it’s an extreme set of factors,” Coleman said.

“So when in situations of stress—for instance, employment loss or relationship problems—those men have less flexibility in terms of coping styles. Suicide can seem like a way of escaping a conflict about feeling like they are not meeting masculine ideals.”

He tested this hypothesis by conducting a secondary analysis of data archived at the University of Michigan’s International Consortium for Social and Political Research. The analysis screened data on young adults for variables relating to suicide and masculinity and found that a link indeed exists between the two.

Now, thanks to a $40,000 grant from the Lois and Samuel Silberman Fund, Coleman is applying the question of masculinity and suicide to another population, adults age 60 and older. For this group, he said, suicide statistics are even more striking: the gender ratio for suicide overall is approximately four male suicides for every one female suicide, but among older adults, this ratio is nine to one.

In addition to looking at age, Coleman will measure how gender role patterns vary across cultures, as this may have an effect on suicide rates (for instance, white men over the age of 70 have one of the highest suicide rates of any age by ethnicity grouping). A next step in this research is to analyze data from the National Violent Death Reporting System to test whether suicide decedents were of a higher traditional masculinity.

“Gender role is a highly culturally influenced factor,” he said. “There’s no data yet as to how traditional masculinity may differ across ethnicities, but I think that’s a very important area to investigate.”

After identifying the factors that place men at a higher risk of suicide, the challenge becomes intervention and prevention.

“Men are well-documented to not want to seek help for mental health problems. And that’s a dilemma in trying to address this problem—how do you make asking for help acceptable?” Coleman said.

Movements are underway to reach out to men who are reluctant about seeking professional help, Coleman said. The U.S. military, for instance, has increased awareness campaigns surrounding mental health issues and the importance of asking for help.

Working toward the same goal, several Colorado organizations joined to launch the website Man Therapy, which features fictional therapist Dr. Mahogany. Seated in a leather armchair in an office bedecked with hunting and sports paraphernalia, Mahogany uses humor to discuss issues such as depression and suicide, and how these affect men.

Though the jury is still out as to whether these targeted efforts can reduce male suicides, it’s important to start somewhere, Coleman said. His hope is that his research will help refine these efforts.

“So far, we don’t really know if any of these campaigns work,” he said. “But that’s how it is in public health. You can’t wait to have a proven intervention. You just have to try things out and evaluate as you go along.”