The fields of political science, theology and biology have distinct differences, but four Fordham faculty members have found a common theme in their disparate areas of research: preserving the natural world. 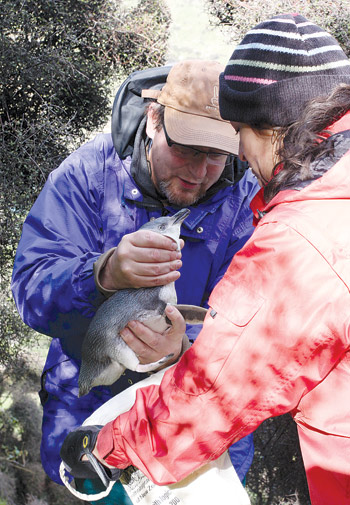 The panelists spoke about their most recent Fordham-funded research projects.

For Clark, it was a detailed presentation about the little blue penguins in New Zealand and Australia. He studied them as part of an effort to determine whether colonies there have enough genetic variations to warrant separating them as species, or whether they’re merely distant biological cousins. It’s imperative to know this information, he said, if one is going to pass laws to protect these birds.

Hogan, an expert in the Old Testament of the Bible, drew upon her research into the book of Exodus to refute the notion that it is God’s will that humans should “fill the earth and subdue it.” If one looks closer, there is ample writing to suggest an appreciation of the earth as a mother figure for humanity.

Lewis highlighted work being conducted by colleagues at the Louis faculty resCalder Center Biological Field Station in Armonk, N.Y. Of particular note is the work being done into the effects of global climate change on biodiversity and invasive species.

New York City, with its six-degree Fahrenheit difference in temperature from surrounding areas, is an ideal laboratory for learning whether, for example, a small urban forest is as nurturing to biodiversity as one in the tropics. (It is.)

For Labonte, being a steward means attending to the fauna as well as the flora on the earth—in particular, the human variety. As an expert on the conflict that tore apart Sierra Leone in the 1990s, she delved into
the challenges of reconstructing a country with few resources and a history of unspeakable violence.

Decentralization is a popular strategy among aid agencies trying to battle
corruption among elites, but its success is still debatable, Labonte said. She suggested that aid donors also examine their own prejudices when it comes to prioritizing rebuilding efforts.

Asked what they thought it means to be a “steward of the earth,” the panelists drew parallels between each other’s research.

Labonte noted that—just as it matters how an animal is categorized if it is to be granted preservation protection—the question of who you are in Sierra Leone makes all the difference in whether you’ll receive aid. Lewis also harkened back to that conundrum, commonly referred to as “elite capture.”

“We as Americans have a responsibility for the rest of the world that we often are not willing to accept. It’s easy for us to say that we’re going to recycle, but at the end of the day, we’re still responsible for consuming a tremendous amount of resources, and that if the rest of the world were to live the kind of lifestyle that we live, the world could not sustain that,” he said.

“As we steward the planet, we need to recognize the profound effects that we have on it. We’ve had an explicit responsibility for thousands of years, from our religious texts, to take care of the planet, and we’re where we are now despite that.”

The event was sponsored by the University’s Office of Research.