skip to main content
Return to Fordham University
You are at:Home»Faculty Profiles»Renaissance Relevance in the 21st Century

Chivalric and epic poems of the Renaissance might seem to have little to do with contemporary culture, but Alessandro Polcri, Ph.D., thinks otherwise. The associate professor of Italian said that the mental gymnastics required to understand the poetic texts provide students with a contemporary skillset.

“Today we live in an interdisciplinary reality, and the complexity of art can’t be seen from one specific point of view,” he said. “When we teach literature we always refer to the text and the language as the primary way to access the culture, but students need a vision of what is around the text, and that requires a multidisciplinary approach.” 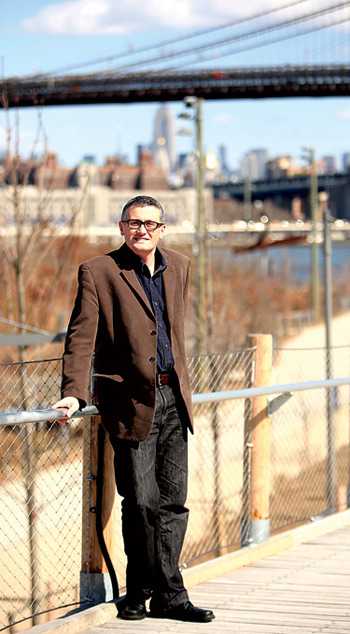 Alessandro Polcri says that epic poems of the Italian Renaissance address issues that are contemporary, particularly with respect to ethics.
Photo by Chaewon Seo

He is now working on a book that analyzes Boiardo’s Orlando Innamorato, an epic poem about Orlando, a knight who falls in love with an unattainable woman, Angelica.

Polcri said it’s much more than just a love poem.

“These epic poems are able to address issues that are modern even if they are about knights that are fighting monsters,” he said. “The mistake that we shouldn’t make is to read this literary genre as an entertaining kind of literature [because]it’s a serious reflection, a kind of literature that examines ethics, behaviors and passions, and it is also an analysis of reality.”

Orlando Innamorato, translated in English as Orlando in Love, is typical of 15th- and 16th-century epic poems that were popular in France and Italy. Tucked into the text is “a method for life knowledge and the complexity of humanity.”

The narrative of the poem is thus: When Angelica arrives at the court of King Charles, all of the men fall in love with her. Up to that point, Orlando has been a study in knightly perfection. He decides to abandon the court and chase Angelica, but to no avail. On seeing her, he thinks:

Polcri said that Orlando experiences a particular change in his life. He begins the poem as a miles christi, meaning a “perfect knight of Christ.” But, with his abandonment of the court in pursuit of her, he becomes a sinner.

After a continuous chasing of Angelica, Orlando never evolves and is left by Boiardo trapped in his desire. He is transformed from a traditionally perfect miles Christi to a man unable to desire moral perfection.

“Perfection is the mother of desire, but chasing earthly perfection is futile,” said Polcri.
Beyond the metaphor of chasing perfection, Polcri said the poem contains strong political components. It reflects on what makes a good ruler, what it means to rule, and what it is to have a perfect society.

“These epic poems correspond to reality,” he said. “After all, these poets were more than just writers, they were intellectuals.”

Polcri’s fascination with the epic poems of the Renaissance began in Italy at the University of Florence and continued when he was a graduate student at Yale University. There, he says he “started writing about the poems and never left,” doing his dissertation on “Allegory and Ethics in the Chivalric Poems of the Italian Renaissance.”
It was in New Haven that he became involved with the Yale Poetry Review, a journal that would follow him to New York, after he and the journal’s founder, Paolo Valesio, Ph.D., the Giuseppe Ungaretti Professor in Italian Literature at Columbia University, moved to New York.

The two now direct a reincarnation called the Italian Poetry Review, and the journal has formed new associations with Fordham, Columbia, the University of Washington, and the Italian Academy for Advanced Studies in America.

Polcri describes the journal as a “transnational, multilingual journal of creativity and criticism.” Essays are blindly peer-reviewed and the journal is open to submissions in any language—provided the content examines Italian poetry. The journal also features reviews and articles, as well as contemporary poetry and creative writing.

So while Polcri’s research keeps him steeped in the Renaissance, his role as director at the journal allows him to keep a finger on what’s happening in Italy today.

“Italy is having a golden moment,” he said. “The poetry of these years has been interesting and many young poets are publishing. And then there’s the booming of online poetry.”
Polcri said that as the journal’s global openness to submissions grows, it allows him to avoid becoming a cloistered academic mired in the 16th century.

“Creative writing journals that operate on the ground are frequently academically detached,” he said. “We include a lot of creative writing, but we remain precisely organized as academic journal.”

But it’s in the classroom where all of Polcri’s activities reach their crescendo.

“Teaching is the biggest commitment,” he said. “That’s where I integrate the research and the work on the journal.”