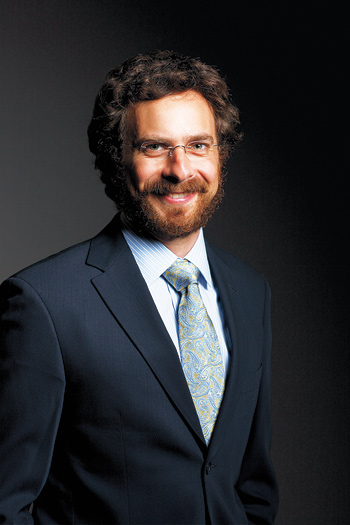 Ethan Leib, Ph.D., has written extensively on the role of friendship in contract disputes.
Photo by Jon Roemer

The phrase “It’s not personal, it’s just business” is as commonplace these days as “The sky is blue,” and “Two wrongs don’t make a right.”

But Ethan Leib, Ph.D., says it’s not that simple. Leib, professor of law, has written on an especially knotty legal area: the role of friendship in contract disputes.

When people draw up contracts, they want to transact on the basis of good faith. However, Leib—a contracts expert—says lawyers see themselves as a mediating force, and often suggest that clients put everything on paper.

“Lawyers struggle with these issues all the time, not only in the litigations that they’re engaged in when relationships break down, but also in the transaction stage,” Leib said. “How do you counsel a client who wants to transact on the basis of friendship? Is your job to promote that relationship so that it works, or is it your job to make sure your client is protected?”

In Friend v. Friend: Friendships and What, If Anything, the Law Should Do About Them(Oxford University Press, 2011), Leib describes how, in some cases, the parties involved in a dispute might have gotten along just fine were it not for their lawyers drawing contracts along adversarial lines.

Lawyers often get more billable hours as a result, but the strategy collides with the fiduciary responsibility that a lawyer has to the client, he said.

“Your job is not just to win the argument (if some day there’s going to be an argument), but to help your client accomplish what they really want to accomplish, which is not paying for litigation,” he said.

Friend v. Friend, and other of Leib’s writings, such as “The Laws of Friendship,” (New York Law Journal, 2012) also discuss ways judges acknowledge, dismiss, or find a middle ground about friendship.

“Judges are mostly operating on instinct and intuition, which may be appropriate, given every factual scenario is going to be different,” he said. “It’s not exactly clear you want judges writing opinions describing how good [a]friendship was, but it’s not actually uncommon to find opinions of that variety,” he said.

“There’s nothing to be embarrassed by in talking about it, and trying to figure out, in any given scenario, what the right answer is.”

While Leib’s work on friendship concerns small groups of compatriots, his research in legislation and constitutional law aspires to study broader classes of citizens. He holds a doctorate in political science, and writes regularly about how to create a deeper and more engaged democracy.

That state’s embrace of ballot initiatives could be improved, he said, if voters had a better understanding of where political parties stand on issues voters were considering. That way, the voters would be able to make informed decisions.

On the legislative side, Leib argued that the party in the minority should have the right to put forth legislation, even if the party doesn’t have the support to make it happen. This, he said, would give voters a better sense of where elected officials stand on issues.

Leib said the ballot initiative system needs tweaking, in light of recent court rulings that allow such initiatives to be overwhelmed by wealthy interests at the expense of free speech.

Proposition 16, a June 2010 ballot initiative that called for a supermajority (two thirds) vote in order to allow local governments to experiment with different utilities, is a classic example of a deep-pocketed interest abusing the system. Pacific Gas & Electric put $46 million into persuading voters to vote “Yes” on the ballot.

“Astronomical amounts of money were spent on promoting the idea that this was a fair voter proposition, when really all it was, was Pacific Gas & Electric trying to make sure it didn’t have competition,” he said.

But, Proposition 16 failed, albeit somewhat narrowly.

Leib is currently focusing his research on state judges who are elected to their offices, and who, thus, have a lot in common with legislators in that they can be “fired” by their constituents.

Is a judge beholden to his or her constituents, or to the rule of law?

“That’s the issue to explore,” he said. His article on that subject is forthcoming in the University of Chicago Law Review.