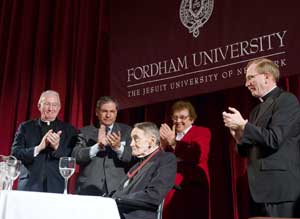 In his lecture, Cardinal Dulles, the first American-born theologian to be made a cardinal without first becoming a bishop, said that a polio infection he suffered in 1945 while in the Navy had now rendered him unable to continue teaching. He called his time as McGinley Professor a personal climax, and said that the most important aspect of his career was the discovery of “the pearl of great price, the treasure hidden in the field, the Lord Jesus himself.”

He also took time to summarize the overriding themes of his lectures, which he said he took great pains to make relevant and understandable to educated Christians.
“When in these lectures I affirm that Jesus sacrificed himself on the cross, or that he makes himself substantially present in the Eucharist, or that the gate to salvation is a narrow one, or that priestly ordination is reserved to men, or that capital punishment is sometimes warranted, in each case I am willingly adhering to the testimony of Scripture and perennial Catholic tradition,” he said.

Cardinal Dulles and the Rev. Robert Imbelli, Ph.D., associate professor of theology at Boston College, sat on stage during the presentation. Father Imbelli, delivered a response to the speech, the 39th in Cardinal Dulles’ 20 years as McGinley Professor. He praised the cardinal’s willingness to listen carefully to others before making up his mind, and listed four ways in which he fulfilled the Ignatian vision, including resistance to any sundering of Jesus from his body, the church.

“To say, as some do today, ‘Jesus yes, church no,’ would be to speak nonsense for Ignatius Loyola and makes no sense for Avery Dulles. Not for Ignatius nor for Dulles is the church some platonic entity floating above history or possessing a merely invisible nature,” Father Imbelli said. “Rather the church of Christ concretely immersed in history subsists in visible form in the Catholic Church, in hierarchical communion with the successor of Peter and the college of bishops in union with him.”

He also noted that if love for Fordham is a characteristic of the Dulles’ legacy, an even more defining feature is his love for the Society of Jesus.

“In my forward to the McGinley Lectures volume, I suggest that one may profitably read these collected essays as so many salvings of the Ignatian charism,” Father Imbelli said. “Brought to bear are crucial theological and social issues of our day.”

Calling him a great priest, a joy of the Society of Jesus and a treasure of the University, Joseph M. McShane, S.J., president of Fordham, bestowed on Cardinal Dulles the President’s Medal, the University’s highest honor.

“I am embarrassed to tell you, you who have given us golden wisdom, that [the medal]is only sterling silver,” Father McShane said. “I console myself, however, with the realization that at the center of the medal which bears the great seal of the University, stands the holy name, the pearl of great price, Jesus himself.”

The lecture was published in the April 21 issue of America Magazine.