skip to main content
Return to Fordham University
You are at:Home»Inside Fordham»Rare Hereditary Disease No Match for Professor’s Research 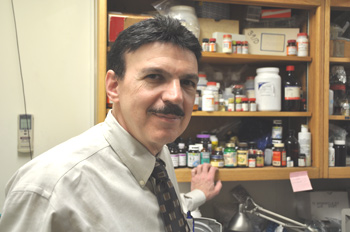 Berish Y. Rubin, Ph.D., has examined roughly 10,000 compounds to gauge their effectiveness on easing the symptoms of FD.
Photo by Patrick Verel

Life for children born with Familial Dysautonomia (FD) is unpleasant, to say the least.

The disorder affects the development and survival of sensory, sympathetic and some parasympathetic neurons. Symptoms include:

FD was long the scourge of Ashkenazi Jewish children, who make up the vast majority of those suffer from the disease. That is, until recently.

Thanks to the ongoing efforts of Berish Y. Rubin, Ph.D., professor of biological science and head of the Fordham Laboratory for Familial Dysautonomia Research, the defective gene responsible for FD has been identified and four different natural compounds have been discovered to combat its effects.

“They’re living a completely different reality,” said Rubin, who is himself an Ashkenazi Jew. “It is very rewarding to have transferred our findings to the bedside so quickly.”

Rubin has been working with FD patients since 2000, more than a decade after he came to Fordham. That was when his team pinpointed the gene that triggers the disease.

Not long afterward, Rubin, who had specialized in immunology and tumor biology, discovered that the mutation was different from many others.

“In most mutations, a change occurs in the DNA and the result is the absence of a functional gene product,” he said. “But there are some mutations that are considered ‘leaky mutations.’ They might produce 5 or 10 percent of the normal amount of gene product, but not the correct amount.”

From there, it was simply a matter of discovering how to increase the production of the gene product in the patients, of whom Rubin estimates there to be between 400 and 500 worldwide. But his team decided that they would not try to create a new drug.

“We felt that if we found a natural compound that was readily available to the population, they could start using it the day after we made the discovery, as opposed to going down the pharmaceutical route, which would require FDA approvals,” he said.

Rubin’s team has analyzed some 10,000 compounds, all of which are available in stores. The first breakthroughs came in 2003. Tocotrienols and epigallocatechin gallate (EGCG) are found in brown rice and green tea, respectively. Although other compounds also increased production of the gene product, only those two had no side effects.

In January, Rubin added vitamin A and beta-carotene to the list of treatments. Although he cautions everyone to consult their physicians before changing regimens, the results have been nearly instantaneous.

A story he loves to tell is of a child who could not fill a bathtub by himself because his lack of sensitivity to temperature made him vulnerable to burns.

“His mother passed the bathroom, and the boy was standing there naked. When she asked why he hadn’t gone into the bathtub, he said, ‘The water is slightly too warm.’

“These kids have not only had an improvement in cardiac function, general stability and increased moisture in their eyes, but they’ve also recovered sensitivity to pain,” Rubin said.

“Doctors used to draw blood and these kids wouldn’t say a word. Now they yelp like anybody else,” he said. “The funny thing is that when they cry, their parents are overjoyed, which really infuriates the kids.”

In addition, Rubin determined in 2005 that tyramine, a compound found in cheese and some vegetables, was the cause of “hypertensive crisis”—horrific periods marked by high blood pressure and retching. When FD sufferers adopt a tyramine-free diet, the frequency and intensity of these episodes nearly vanishes.

Using compounds that they get from vitamin companies gives Rubin’s team the advantage of moving fast. For instance, it took about a year to test and verify the beta-carotene treatment. But it also makes some physicians skeptical. Their skepticism is unwarranted, Rubin said, because he is extremely circumspect with his findings.

“I’m slow in terms of announcing things to the community,” he said. “We have a natural compound now that works incredibly well, for instance, but I am hesitant to share it with the community because I haven’t answered all the questions about its safety.”

Rubin’s caution has evidenced itself in the outcomes of his team’s clinical trials. Of the 50 patients they have followed since 2003, none have died. Pictures of many of them are taped to Rubin’s office and the lab where the testing occurs.

By contrast, of the roughly 300 FD sufferers who have not embraced, for various reasons, his tocotrienols and EGCG regimen, 50 have died.

“The difference is so real,” he said.

Ann Slaw, president of the Familial Dysautonomia Now Foundation, certainly thinks so. A resident of Buffalo Grove, Ill., Slaw credits the research with giving her son, Andrew, 18, a future. They began Andrew on tocotrienols when he was 10, and within two weeks his hypertensive crises had dwindled to practically none. This came after he had been in the hospital for six months.

“On day three, he’s jumping on the hospital bed with his younger sister, the two of them holding hands. They’ve raised it to the highest level; they’re trying to touch the ceiling,” she said. “If there was ever a time when I can say I witnessed a miracle, that would be it.”

Slaw admitted that it was difficult to try a new treatment, but it helped that Rubin wasn’t recommending a pharmaceutical with major side effects.

The skepticism is, ‘No, no, no, it can’t be as simple as tocotrienol. How could something sitting on a shelf at Whole Foods dramatically change my kid’s autonomic function?’