skip to main content
Return to Fordham University
You are at:Home»Inside Fordham»Rapaccioli Named Dean of College of Business Administration 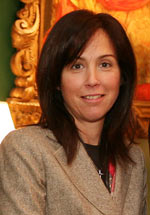 Donna Rapaccioli, Ph.D., interim dean of the College of Business Administration (CBA) since August of 2005, has been appointed the school’s permanent dean. Joseph M. McShane, S.J., president of Fordham University, announced the appointment on Jan 2.

“I know the entire University community will join me in thanking Dr. Rapaccioli for accepting the deanship of our College of Business Administration and in wishing her well as she assumes her permanent post,” said Father McShane. “I am also sure that the entire University family will join me in thanking members of the search committee for all they did.”

Rapaccioli, associate professor of accounting in the University’s faculty of business, has served as acting dean since the Fall of 2005. She earned her bachelor’s degree in business from Fordham’s CBA and her M. Phil and Ph.D. from New York University’s Stern School of Business.

“I’m very excited to assume the role of the dean of the College of Business and to help bring the goals of the University strategic plan to fruition at CBA,” Rapaccioli said. “Under the umbrella of Jesuit education CBA will continue to focus on global academic initiatives, experiential initiatives and in capitalizing on the vast opportunities New York City provides for our students. CBA’s business curriculum, firmly grounded in the liberal arts and the Jesuit tradition, allows our students to become compassionate business leaders who shape the global business environment, rather than merely react to it.”

Under Rapaccioli’s guidance as interim dean, the CBA was ranked among the nation’s Top 50 undergraduate business programs by Business Week (2006), and was named as a Premier School (2006), one of a select group of only 38 nationally, by KPMG, one of the nation’s largest international public accounting firms.