skip to main content
Return to Fordham University
You are at:Home»Inside Fordham»Ram Rhyton Takes Up Residence at Rose Hill 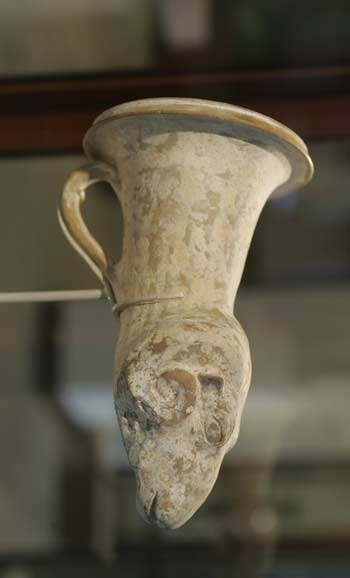 The rhyton on loan from the Sackler Foundation is highly detailed.
Photo by Bruce Gilbert

Ram Mascot, get ready to share the limelight: the Rhyton has arrived.

Fordham’s Museum of Greek, Etruscan and Roman Art is the recipient of an ancient rhyton, or drinking cup, in the shape of a ram’s head.

The terracotta vessel, which is thought to date from the late 5th- to 4th-century B.C., and to come from southern Italy, is on loan at Fordham through 2011 from the Arthur Sackler Foundation, an art-lending institution of more than 1,000 works. It premiered at the University on Nov. 5.

“The Greeks loved these cups, which were used for banquets, weddings or drinking parties,” said Jennifer Udell, curator of university art. “They had all sorts of shapes for them—calves, bulls, goats, even dogs—but the ram is a fairly common shape. This one is in great condition; it’s completely intact and its details, the curled horns especially, are exquisite.”

Most rhytons were elaborately designed in gold and silver and used by the royal houses of the Persian Empire. The ram rhyton on loan, however, is a high-quality ceramic adaptation more appropriate for everyday use in the homes of well-off Athenian or Greek colonists, Udell explained.

It is finished in a pale white undercoat that suggests it was never fully rendered in its final colors. The absence of color, however, accentuates its detail, Udell noted.

The rhyton came to Fordham through the help of Stephanie Collazo (FCRH ’01), an art history major who worked at the Sackler Foundation as a collections assistant.

“The ram head reminded me of Fordham, and there was a joke in the office that it was my mascot,” Collazo said. “When the museum opened last December, I mentioned that maybe Fordham would want to do a loan . . . and both sides were interested.”