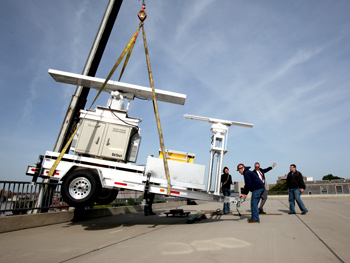 A crane hoists the 4,000-pound avian radar unit onto the top of the Fordham parking garage.
Photo by Bruce Gilbert

For two weeks in May, the top level of Fordham’s parking garage at Rose Hill hosted a 4,000-pound avian radar unit, installed for use in a University pilot study on night bird migration.

Each day from dark to dawn the radar unit imaged birds flying overhead returning from their winter homes as far away as Central and South America.

Alan Clark, Ph.D., assistant professor of biology, and biology graduate students Oriana Chan, Jessie Ross and Rachel Bricklin, are analyzing the unit’s measurement data as well as recordings they made of the night-flight calls most birds give as they migrate.

By matching the numbers of bird night-flight calls with radar data showing the actual numbers of birds, the group is hoping to determine how birds are affected by light and noise when they travel through urban corridors during migration.

“The radar data will tell us if, in fact, birds are being drawn away from safer dark green spaces during migration,” Clark said. “No one has done this kind of integration of sound and radar, especially within a city.”

The parking lot was chosen because it provided an unobstructed view south, where large numbers of birds could be visualized through the radar, Clark said.

The unit, provided by DeTect, Inc., is the same kind of radar system employed by airports and wind farms to track the presence of birds in flight paths.