skip to main content
Return to Fordham University
You are at:Home»Inside Fordham»Quarterback Focuses on Completing the Pass, Then the Deal 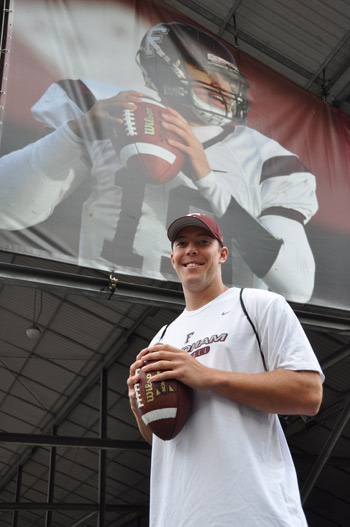 Each day on his way to class, Rams quarterback John Skelton walks past his own image, larger than life, draped over the stands just inside Fordham’s Houlihan Park.

This wholly surreal experience, admitted the Fordham senior, is kind of cool.

Skelton has captured the eye of NFL scouts, agents and local media for his on-field accomplishments and athletic stature. Stories of the broad-shouldered 6-foot 5-inch athlete have appeared in his hometown paper, the El Paso Times, not to mention the Daily News, New York Post and The New York Times. A photo and brief appeared on Sept. 25 inNew York Magazine, showing the senior, brows-furrowed, lying on the field, head resting on a football.

His coach, Tom Masella, has taken to calling him the “PR Machine.” And some assistant coaches and teammates have good-naturedly coined the phrase “Johnny Franchise.”
What does Skelton make of all the fame?

“The attention kind of fell on me,” said the polite Texas native, who has set several school passing records with his strong right arm. “But it’s all pretty exciting, being noticed.”

To hear Skelton tell it, one day last summer his name showed up on a Sports Illustrated website listing potential NFL draftees, and then “there was a bit of a buzz about me.”

But that’s not quite all of it, said Coach Masella. Like many young boys in Texas, Skelton lived, breathed and played football most of his life. While in high school, he dreamed of playing in the NFL. But while he was a senior at Burges High in El Paso, a crop of other state quarterbacks overshadowed him with better win-loss records, and only one scholarship offer was forthcoming. It proved serendipitous that Skelton dropped his tape off with Masella during a visit to the East Coast.

Duly impressed with what he saw, Masella was on a plane to El Paso the following week.
Masella said he has watched Skelton’s progression: from a rather shy 220-pound freshman to his current 250 pounds of on-field strength, focus and confidence.

“John’s a tremendous athlete,” Masella said. “He’s got all the stats and vitals that the NFL is looking for, even though Fordham plays at a lesser division than the ‘big boys.’”

Indeed, it is rare for players in the NCAA Football Championship Subdivision to catch the eye of professional scouts and agents. The last time a Fordham athlete was drafted was in 1968, when Kenny Parker went to the New York Giants in the 16th round.

But Masella said that “scouts will find these types of athletes no matter where they are—and John is that type of athlete.”

For his part, Skelton has chosen to let his parents manage all of the publicity brouhaha.

“I just want to focus on football,” Skelton said recently, as he studied videotapes of an opposing team’s plays. “So I let them screen everything right now.”

That puts his mother, Anna, a middle school administrator, and father, John Sr., a high school football coach and special education manager, in charge of interviewing agents and speaking with NFL scouts on their son’s behalf. And Skelton said they’re pretty good at it.

“If you ask my mom, I hung the moon,” Skelton laughed. “They’re both proud as parents can be . . . in fact, sometimes I have to tell them to tone it down a bit.”

The only person who is prouder of him, he said, is his “biggest fan,” his younger sister, Sarah, who “gets teary-eyed every time she sees me play.”

Skelton also has postponed until next semester that last difficult class in mathematical methods that he needs for his May 2010 graduation with a degree in business. “I’ve had to find the right balance between playing and studying; for me it’s to move the harder classes to the spring,” he said.

As the season unwinds, Skelton said he’s especially looking forward to the team’s Patriot League games. The preliminary buzz has Fordham taking 5th place this year in the final league order, but Skelton wants to improve on that prediction.

He’s counting on his team members, including his younger brother, Stephen, a receiver, to help make it a winning season.

Although being “noticed” is nice, being “watched” can be a bit more intimidating; however, Skelton says it doesn’t interfere with his game.

And Masella sizes it up in a more nuanced fashion. “Probably there is some pressure, but as a competitor, John’s used to it,” said the coach. “But, heck. He’s got an opportunity to do something that he’s probably been dreaming about since he was a little boy. Wouldn’t we all want to follow a dream?”