skip to main content
Return to Fordham University
You are at:Home»Inside Fordham»Q-and-A Measures the Metrics of a Mayor’s Success

What drives former Mayor Michael Bloomberg and what will be his mayoral legacy?

Those and other questions were put to Howard Wolfson, Bloomberg’s former deputy mayor for government affairs and communications, on March 26 in an interview launching Fordham’s Oral Archive on Governance in New York City: The Bloomberg Years. 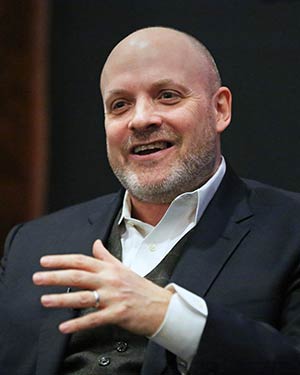 Wolfson was interviewed by Costas Panagopoulos, PhD, professor of political science and director of Fordham’s Center for Electoral Politics and Democracy. Wolfson offered an insider’s glimpse of the former mayor as person, policymaker, and visionary.

He said that, contrary to Bloomberg’s media image as billionaire technocrat, the businessman-turned-mayor was adept at wearing a politician’s hat and enjoyed mingling with the public during campaigns and other public events.

“People forget that the skills he brought to Bloomberg Industries were the skills of a salesman,” said Wolfson, who still works with Bloomberg on his philanthropic endeavors. “He knows how to sell a vision, a concept,” something he has done since he was designing and creating financial information terminals as an entrepreneur.

Nevertheless, Wolfson said that Bloomberg’s foremost talent—in fact, “his calling”—is in bullpen-style management and in the running of a complex organization. It was that aspect of being mayor that Bloomberg enjoyed the most.

Another asset was Bloomberg’s lack of political experience prior to his election—a plus because he didn’t know what “couldn’t be done.”

“He hadn’t spent 20 years in politics learning the ‘rules of the road,’ which tend to narrow people’s sense of what is possible,” said Wolfson. “It was easier for him to see his way toward ‘yes.’”

That Bloomberg vision, coupled with his willingness to push unpopular public policies, resulted in political wins, such as his citywide smoking ban, but also failures, such as congestion pricing and a ban on large sugary drinks.

Even then, said Wolfson, Bloomberg saw success in his attempt to pass regulations on sugar intake, because it inspired a closer look at the issue.

“What we tried to do with sugary drinks in New York changed the debate nationally,” he said. “Sometimes what one person might call a failure he would consider a success: Okay, the court struck it down but we changed the conversation.”

As a manager, Bloomberg showed fierce loyalty to staff, said Wolfson. Under his tenure, it was frowned upon to be unsupportive of a colleague; Bloomberg once told him that “the day that newspapers are going after you, that’s the day I walk around with my arm around you.” When questioned by news media, Bloomberg has refused to criticize the current mayor, Bill de Blasio–which Wolfson sayshe does out of respect for the office in which they both have served.

Regarding Black, Wolfson said that Bloomberg would never use the word “sorry” with regard to the appointment, but acknowledges that she was not the right fit. As to poverty and income inequality, Wolfson said the mayor would not view himself as the “great leveler,” rather he sought to create opportunities for poor and middle-class New Yorkers, who he said fared better than the poor in other cities during economic downturns. In fact, he welcomed the rich as a means of strengthening the city’s tax base in order to redistribute monies to those in need.

Bloomberg took office in 2002, immediately following the single most tragic event in the history of the city. Wolfson speculated that he will be remembered as “the guy who came in after 9/11” and created the memorial museum to honor those who died. The larger legacy, however, will be the mayor’s vision for rebuilding an economically collapsed, spiritually broken city.

“At a time of enormous difficulty in the city’s history, he was able to assume leadership [and]give people confidence in New York,” he said. “He believed in the promise and the future of New York. [Even today] he sees it as a gateway to opportunity.”