skip to main content
Return to Fordham University
You are at:Home»Inside Fordham»Publishing Executive Shares Not-So-Secrets of His Success 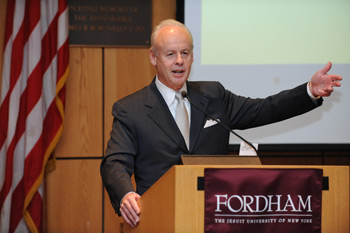 Paul Carlucci, CBA ’69, stresses the importance of finding a mentor to succeed in the business world.
Photo by Chris Taggart

Traditional business practices have changed with the advent of online commerce and social media, according to the publisher of the New York Post. Still, the strategy for running a successful company remains essentially the same.

Carlucci spoke on April 12 at the Lincoln Center campus as part of the Flaum Leadership Lecture Series.

“Leadership is still a process that requires warmth,” he said.

In his hour-long address, “Business Yesterday, Today, Tomorrow … How to Be Successful in Corporate America,” Carlucci shared anecdotes from his four-decade career in publishing, which began in the sales department of the New York Daily News shortly after his graduation from Fordham.

Drawing on his personal experiences, he mapped out for the audience of approximately 75 Fordham students, administrators and guests what he considers the five most effective and efficient business practices.

“At News America, we purposely avoided coming up with a mission statement,” said Carlucci, who joined Rupert Murdoch’s News Corporation, the parent company of the New York Post and News America Marketing, as executive vice president in 1991.

“We came up with five operating principles for what we felt were the best ways to run a company,” he said. They include:

“Human resource development is probably the thing we believe in the most and probably led us to the most success,” he said.

Carlucci also recommended calling on the “bad guys,” or the people with a reputation for being difficult business partners.

“Once you build on that relationship,” he explained, “they will always come to you and tell you everything you need to know about the industry and your competitors, because you’ll more than likely be the only one reaching out to them.”

He also stressed the importance of finding a mentor, someone “pure of heart” who “gets an absolute kick out of your success.”

Among the welcome changes to the way people do business today, he said, is the mellowing of the executive class.

He told a story about a CEO who once went out of his way during a board meeting to berate two heavyset employees with an offensive, expletive-ridden rant.

“That conduct and that style obviously can’t work in today’s business world,” he said. “It has changed so radically, but that story is truly the essence of my background. It really happened. It happened all the time.”

Like many of his generation, Carlucci said he adopted the business discipline of his superiors but left behind their politically incorrect traits.

“Loyalty is a two-way street. If you’re there for your employees, you can build leaders in your organization,” he said.

Sponsored by Sander Flaum, the Flaum Leadership Lecture Series provides Fordham University’s Graduate School of Business Administration students with opportunities to connect with notable leaders from the world of business.