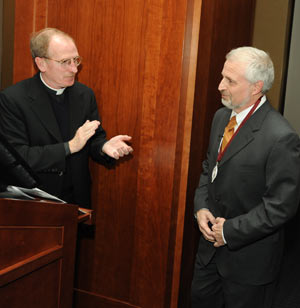 David V. Budescu, Ph.D., a psychologist who has researched the effects of uncertainty on human judgment and decision-making, was installed as Fordham University’s first Anne Anastasi Professor of Psychometrics and Quantitative Psychology on Dec. 2.

The prestigious chair, established with a bequest created in Anastasi’s name, enhances the legacy of the former Fordham professor whose book, Psychological Testing(Macmillan, 1954), is considered by many to be the definitive text in the field of testing.

Anastasi was a member of the Fordham faculty from 1947 to 1985 and chair of the Department of Psychology. Her career as a researcher, mentor and educator began when she was accepted to Barnard College as a 15 year old. In 1987, she received the National Medal of Science from President Ronald Reagan. She also broke boundaries as one of the few female presidents of the American Psychological Association. Anastasi died in 2001.

“All things were possible with Anne Anastasi,” said Joseph M. McShane, S.J., president of Fordham. “She was a force of nature, both on campus and in her field. We will be forever in her debt for what she did for Fordham. Because of her generosity, she continues to enable us to take our place in the front ranks.”

“It is always an honor for a researcher to be recognized by being endowed with a chair,” Budescu said. “It is even greater that it is named for someone who was a role model for so many of us.”

Following his inauguration, Budescu gave the first annual Anastasi Lecture on “A Decision Theoretical Perspective on Psychometrics: Analyzing Test-Taking Behavior.” He said that psychometric theorists could devise more accurate test measurements if they incorporated the test-takers’ behaviors into the standardized multiple-choice test design.

“There is commonality in the decision process that goes into betting on a horse, or betting on commodities, [or]when a test taker takes multiple choice tests,” Budescu said. That commonality includes patterns of human behavior that are not part of a psychometric approach, he explained. Unfortunately, ignoring patterns of behavior can affect the quality of measurement in tests.

Budescu pointed to several examples from his research of ways to improve the accuracy of multiple-choice tests:

• Current formula scoring in the SAT test is not optimal because it only recognizes “perfect knowledge or absolutely no knowledge,” leaving no room for “partial knowledge.” (On SATs, students are not penalized for leaving a blank, but are penalized for a wrong answer.)

“It assumes that people are perfectly clear about what they know, when data shows that people are very bad at judging their own state of knowledge—therefore we can’t expect them to judge correctly whether they know or not,” he said.

In fact, research showed that students did better when they ignored SAT instructions to “answer only what you know” and answered everything based on what they thought most likely to be correct.

Lastly, Budescu said that the psychometric-based design of “key balancing,” in which answers appear with equal probability in all positions (A, B, C, D) can be exploited by smart test-takers.

“The cartoon character Linus said that ‘if you’re smart, you can pass a true-or-false test without being smart,’ and he was right,” Budescu said.

Budescu said he tells students to follow the “underdog strategy” when taking standardized tests. First, answer all the questions to which you think you know the answer. Then, count how many times you used each letter (A, B, C, etc.)

“Then you take the least used letter and fill in the rest,” Budescu said to laughter. “You can gain between 10 and 16 points, which is usually in line with the results of what people gain from coaching.”

“Theory can be improved if it reflects empirical observations about behavior,” he said. “Economic theorists have become more aware of behavioral results. I’d like to think that psychometric theorists will adopt the same approach.

“It will improve the quality of the measures,” he said.