skip to main content
Return to Fordham University
You are at:Home»Inside Fordham»Psychology Professor Views Social Support Through an Empirical Lens 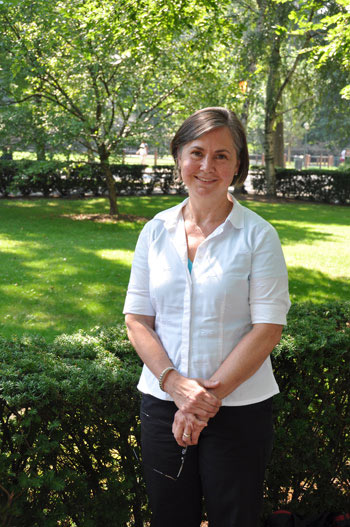 In the mid-1970s, psychological studies on the effects of stress were just beginning. At the time, psychologists focused on the ways stress affected adjustment or maladjustment, and how physical well-being was influenced by the two. There was a very straightforward understanding that social support of any kind would help to buffer the effects of stress.

An inquisitive graduate student suspected that the relationship was not as simple as it appeared. She hypothesized that the meaning people gave to their subjective experiences of social support played an important role in the effectiveness that support had in helping them cope with positive and negative life events.

That graduate student was Mary Procidano, Ph.D., associate professor and associate chair of undergraduate studies in the Department of Psychology. Since graduate school, Procidano has made the measurement and assessment of people’s experiences of social support a main focus of her research. Her early hunches proved to be quite prescient, as the importance of the appraisal and meaning of social support is now a commonly held view within the field.

According to Procidano, who focuses on interpersonal and cognitive psychotherapies, external indicators of support do not necessarily translate into greater well-being.

“People are active creators of their support networks and active evaluators,” Procidano stated. “It’s a complex two-way street where supportive people need to be available, but there also has to be something in the nature of the transaction and the person’s experience that makes it a supportive experience.

“Say somebody loses a job and that adult’s parent comes in and says, ‘Don’t worry. I’ll pay your mortgage for you. And I’ll do this for you, and I’ll do that for you.’ Is that experience support?” she asked. “Well, it depends on the history of the relationship.”

Procidano defines social support as “people’s experience of being accepted, of having someone there to accompany them through positive and negative experiences.” She stresses the importance of “expectations of mutual obligation,” by which giving is as crucial to well-being as receiving.

Her research focuses on the development of empirical methods of collecting data to record people’s experiences of support in regard to two “life tasks”—coping with stressful life events and pursuing personal goals.

Through the self-reports of numerous people, Procidano has found that positive experiences of support contribute to emotional regulation, better coping skills and a greater sense of personal agency. There is also evidence that positive support experiences lead to better immune system functioning.

In regard to personal goals, the findings show that people with more support and less non-support (or what some call hindrance) put more importance into their goal strivings and feel less ambivalence about them.

But on the other end of the spectrum, people lacking supportive relationships may place too much importance on achievements. These individuals may think, “I’ve got to accomplish this and it’s got to be perfect or my life is going to fall apart,” Procidano explained.

While positive experiences of support are related to well-being, and non-support to distress, non-support is more powerful in that it also detracts from feelings of well-being.

“That’s because it violates our expectations of what life is supposed to be,” Procidano said.

At the same time, no relationship provides an unvaried experience, she added. “There’s not one continuum with support at one end and non-support at the other. People have combinations of positive and negative feelings.”

Spiritually based psychotherapy is another of Procidano’s interests, and her studies have found that people’s relationships with God mirror their relationships with others. The same well-being is produced from positive experiences of perceived support.

However, people who feel that God is unconcerned, has abandoned or is punishing them report “lower levels of well-being and higher levels of distress,” Procidano said. Through cognitively oriented therapy, however, such negative views can be addressed.

Today, Procidano’s research has widened to a cross-cultural view, with collaborators in nine countries including such diverse places as Mexico, Poland and Thailand.

The collaborations arose after her original measures on perceived social support were translated into different languages and appeared on the Internet.

“Our collaboration assured that the translations—done through a process called back translation—were accurate, and that the items functioned similarly across cultures,” she said.

Procidano described two main perspectives on cross-cultural psychology: “One says we’re all human, so things should generalize across cultures. But other people are more inclined to say each culture is distinct, so these expectations and experiences should differ across cultures.” She has found that the reality lies somewhere in between. “The point is to try to explain what parts are similar and what parts are different,” she said.

For instance, people from “individualistic” cultures, which value individual achievement, self-esteem and independence, are likely toreport different experiences of social support from people in “collectivistic” cultures, where there is more emphasis on group membership and contribution.

Despite the work of many researchers over the years, a general theory of social support has never been articulated. One of the main goals of Procidano’s work is to formulate such a theory, one that is “cross-culturally robust, that explains generalizability across cultures as well as differences,” she said.

Ultimately, the research data link back to the real experiences of men and women who may be helped by Procidano’s findings. “What we’re always interested in is distress and well-being, the emotional outcome,” she said.