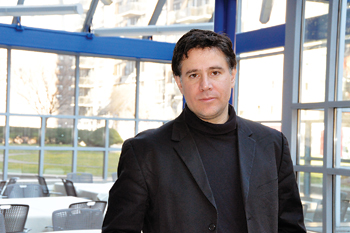 What kids learn in school comes from more than just the classroom.

According to Joshua Brown, Ph.D., schools comprise multiple settings, or “micro-contexts,” that children encounter through the school day, and together these can affect their school experiences and, hence, personal development.

Brown, an assistant professor of psychology, is investigating the impact of these settings, or contexts, on students as part of his research, “Early Adolescents’ Experiences of Continuity and Discontinuity of School Micro-Contexts: Implications for Place-Based Treatment Effects.”

Funded by the William T. Grant Foundation, the study examines how students fare when the quality of their school environment fluctuates.

“One of the things we know is that school contexts in elementary school make a big difference,” said Brown, who has been monitoring the progress of a particular group of students for eight years. “A school environment, and particularly a classroom environment, can influence how kids develop socially, emotionally, and academically.”

The project is an outgrowth of a study that Brown and his team conducted in 2009. That project, for which Brown received $1.7 million from the National Institute of Mental Health (NIMH), examines the long-term effects of teaching social-emotional skills—such as cooperation, assertiveness, and negotiation—to children in elementary school.

The study, “Health Risk Behavior in Late Childhood: Impact of a Longitudinal Randomized Trial,” followed a cohort of third grade students from 18 New York City public elementary schools. The schools were randomly assigned to either receive a schoolwide intervention that taught these skills as part of language arts programs, or to remain “business as usual.” The team found that children who received the intervention benefitted developmentally during elementary school—particularly children who were initially at a higher risk for behaving aggressively.

However, the question that remained was what happens to these children once they move into middle school—especially if that middle school lacks a positive, nurturing, and well-organized environment.

“We hypothesize that kids who are in continuously high-quality environments are going to benefit the most developmentally, and kids who are in consistently low-quality environments are going to benefit the least,” Brown said. “And we’re not as sure about other patterns—going from a high-quality elementary school to a low-quality middle school, for example.”

The team monitored the group of students as third-graders during the intervention project, and followed them as they transitioned to middle school. Specifically, they analyzed the myriad settings—the micro-contexts—that students encounter during a routine school day and how these affect students.

“Even in elementary school, where they tend to be with one teacher, there are multiple contexts throughout the day,” he said. “They go to a cafeteria at lunch and spend recess time on a playground. These are other important contexts that might influence development. Even bathrooms and hallways can be places that kids experience as unpredictable or unsafe, which can create lasting anxiety and challenge their ability to focus on learning.”

The more micro-contexts there are, the more likely a student will experience discontinuity between their qualities, he said. For instance, middle school students who have a different teacher for each subject may travel from low- to high-quality environments multiple times per day. Non-instructional settings within school, such as hallways and lunchrooms, can also fluctuate in quality. And whether the overall school environment is consistent or inconsistent, Brown hypothesizes, could shape students’ developmental outcomes.

“A lot goes on in all these settings that lead kids to feel secure and safe or worried and distracted about going to school,” he said. “Kids have to feel bonded to school. When kids feel uncertain or scared in different parts of their school, the risk of health and mental health problems increases, and they can become disengaged from learning in school.”

The team has focused on 20 New York City middle schools, collecting data from 225 students and 106 staff members through student focus groups, interviews with staff members, and classroom and school observations.

Brown and his team hope to ultimately help inform how schools think about high-quality environments that would best address students’ developmental needs—not just in formal instructional settings like classrooms, but also other micro-contexts that shape children’s experience in and out of school.