skip to main content
Return to Fordham University
You are at:Home»Inside Fordham»Psychologist Seeks to Develop Treatment Program for Stalkers 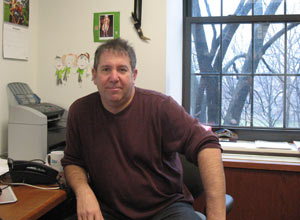 Before joining the Fordham faculty in 2000, Rosenfeld was a senior psychologist for the New York City Forensic Psychiatry Clinic of Bellevue Hospital. There, he evaluated numerous stalkers—people who willfully, maliciously and repeatedly follow and harass others—and published several articles on their tendency to commit violence and to relapse.
“If you’re being stalked, you’d like to figure out if this person is trying to kill you,” said Rosenfeld, a forensic expert. At the time, he was struck by the absence of an established approach to dealing with this population.

“Clinicians don’t want to be stalked either,” he said. “They think, ‘If I start taking this person on, will he stalk me? Do I even know what to do with this person?’”

Today, Rosenfeld is the principal investigator on the study, “Dialectical Behavior Therapy (DBT) for Stalking Offenders,” which compares DBT, a treatment traditionally used for severe personality disorders, with a treatment based on anger management. The multi-year project is funded by a three-year, $800,000 grant from the National Institute of Mental Health (NIMH).

To date, they have studied more than 100 stalkers, most of whom were referred by probation departments in Manhattan and Brooklyn. The participants were court-ordered to undergo psychological treatment and subsequently volunteered for Rosenfeld’s project to fulfill their court mandates. They were placed randomly in the DBT or anger-management treatment plan for six months, Rosenfeld said.

While Rosenfeld continues to gather data from the subjects, he can report that the DBT approach is successful when the study participants buy into it.

“These are very hard folks to keep in treatment,” he said. “They almost never admit something is wrong with them; we have consistently struggled with the challenge of keeping people who don’t want be in treatment in a six-month program.”

When Rosenfeld and his research team can get participants to buy into the program, however, DBT has proven “extremely successful.”

“Often these people would not have had a meaningful treatment experience otherwise,” he said.

In fact, hooking participants into DBT treatment is exactly what distinguishes the approach from anger management.

“We’ve had a lot more people successfully complete the DBT arm [than the anger management arm],” he said. “DBT has much more emphasis on engagement and commitment, whereas anger management takes the attitude that, ‘You’ll come if you want to come.’”

Therein lies the success of DBT, which Rosenfeld called a viable treatment for the stalker population.

DBT is a fairly intensive, behaviorally oriented program that integrates elements such as cognitive psychology and Eastern philosophy.

“It has things like mindfulness, which is rooted in Zen Buddhism,” he said.

“Stalkers often will feel bad; they’ll feel lonely; they’ll feel vulnerable; and think, ‘I want to be with that person,’” Rosenfeld explained. “Then they’ll call, even though there’s an order of protection saying they can’t call. They won’t get an answer and then call again five minutes later. It’s acting on an impulse, not being able to handle feeling bad in the moment and not having particularly good impulse control.”

The study comparing DBT to anger management treatment for stalkers is slated to continue through 2009. Rosenfeld will continue to engage this population, which often chooses not to continue the treatment.

“We still lose a large number of people to things like drug problems and all sorts of other outside problems. This is a very disenfranchised population,” Rosenfeld said. “We have people who literally don’t have the subway fare to come to us.”

Rosenfeld’s goal is to establish a center that will offer DBT therapy long after the present study ends.

“Using DBT, we’ve been able to get people engaged and through treatment that would never otherwise have gotten through treatment,” he said. “As a testament to that, we’ve had a lot of people request to continue voluntarily with treatment after finishing their court mandate.”