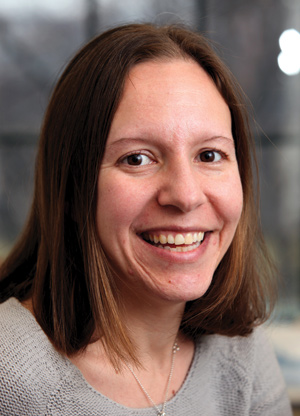 The transition from adolescence to adulthood is a hard one for most young people, let alone for a child who has undergone an organ transplant at the same time.

One Fordham psychologist knows that to such a child, learning to be responsible can be the difference between life and death.

Rachel Annunziato, Ph.D., assistant professor of psychology and a pediatric psychologist, has studied this specific cohort for several years. In a 2007 retrospective study, Annunziato and her co-researchers noticed that some metropolitan area post-liver-transplant adolescents (four out of 14, in fact, over about a five-year period) died when they moved over from pediatric care to adult care.

Annunziato wanted to find out why.

“Deaths are unusual in this population,” said Annunziato, who does her research at Mt. Sinai Medical Center. “The data suggested that there was something about the transition that was dangerous.”

Annunziato discovered a disconnect between what pediatric (“peds”) clinics were recording and what adult clinics were reporting: Adult clinics were telling her that the young patients didn’t listen to instructions, did not take care of themselves and sometimes didn’t even show up for appointments.

“The adult clinics’ perception was that the peds clinics were sending them the worst patients and keeping good ones for themselves,” she said.

In reality, the transition was proving hard for young patients, said Annunziato, in part because the clinics operate differently: peds clinics schedule on average four annual visits, compared to adult clinics’ rate of one or two annually. Peds clinics rely more on parental intervention and have a much lower caseload, as there are fewer child transplant patients.

The young patients, most of whom were from low-income households, were simply falling off the radar in transition.

“Many of them had never talked to a doctor in their lives without a parent, or had never called in a refill or scheduled an appointment,” said Annunziato. “In the adult system, nobody was holding their hand anymore.”

For patients taking an immunosuppressant, she said, irresponsible behavior is no light matter. If transplant patients lose the functioning of their new livers, she said, there may be no second transplant opportunity.

The 2007 results suggested that peds clinics had to do a better job of building transition skills, said Annunziato, so in 2008 she and her co-researchers launched a series of program improvements coupled with a longitudinal study now enrolling 20 young transplant patients.

Under this study, Annunziato acts as “transition coordinator” for the cohort as they move from pediatrics to adult care. Participants were enrolled in the study during their very last peds clinic visit. Annunziato’s team is following their progress through the adult system.

The patients are assessed every six months (data collection is done partly by Annunziato’s undergraduate and graduate students). In between, Annunziato operates as a “go-to” person for the participants, troubleshooting on their behalf and keeping various coordinators, social workers and physicians informed.

One improvement Annunziato has made is to make certain that the first adult clinic appointment is scheduled very soon after the last peds appointment. She also counsels the patients on patience: Often adult clinics do not provide test results quickly and do not call back immediately.

As this is an ongoing study, some of the research findings have already been presented in a 2010 issue of the journal Pediatric Transplantation—and they are positive, said Annunziato. With just minimal time commitment (approximately three hours a week) the transition program has kept all 20 participants alive and on track.

It is Annunziato’s hope that the results of the completed study, expected by 2013, will demonstrate improved outcomes, and offer data-driven, empirical research documenting the value of using a transition coordinator.

“A lot of groups have advocated for transition coordinators but nobody has studied their effectiveness—until now,” said Annunziato. “We hope our data is promising enough that this could be a model, not just for transplants but for other pediatric conditions as well.”

On Feb. 3, Annunziato was honored by the Office of the Dean of Arts and Sciences for her undergraduate teaching expertise in the sciences. (see Four Fordham Faculty Feted in this issue) She said she is fortunate to be able to bring real world experience to her students by involving them in collecting research data in the hospital’s pediatric specialty clinic.

“My undergraduates are the same age as my patients,” she said. “So it is rewarding for them both. They can more easily share experiences.”