skip to main content
Return to Fordham University
You are at:Home»Inside Fordham»Psychologist Deconstructs the Typical Guy, the Marlboro Man and Others 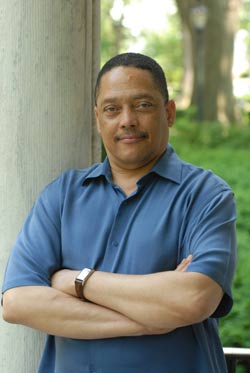 They don’t eat quiche, they don’t cry, and they refuse to ask for directions. They’re supposed to be the uncomplicated gender.

But “typical guy” and other stereotypes, according to a Fordham psychologist, belie the tangled psyche of the male—in particular the African-American male.

“What I study is broadly the psychology of men,” said Jay C. Wade, Ph.D., associate professor of psychology and author of “The Case of the Angry Black Man,” in In The Room With Men (American Psychological Association, 2006).

As an African-American occupational therapist working in mental health care in the 1990s, Wade noticed a reluctance among some health care professionals to work with so-called “angry” African-American male patients. Wade observed that medication sometimes became a form of dealing with such behavior, which, he said, did nothing to get at the root of the problems.

“It was hard to get them diagnosed properly,” he said. “If a black man was expressing himself too strongly, everybody got scared.”

But according to Wade, anger in men is typically a defense. “Men show anger to express myriad other feelings. Pain, disappointment, frustration, depression, anxiety— all of these could be expressed as anger,” he said “If you as a [clinician]become defensive about it, then you are not helping the person.”

Troubled by what he was seeing, Wade asked to work directly with one African-American male patient. George was a middle-aged former social work supervisor with substance abuse issues whom the staff had labeled as “threatening.” Through counseling, Wade observed that George, who had lost his job, was having difficulty living up to the standards of traditional masculinity—roles such as head of family, husband and father.

Through the course of treatment, Wade discovered that George blamed himself for his mother’s death. George’s anger was self-directed guilt in disguise, and feelings of having failed at being a son.

The experience counseling George inspired Wade to want to take on a more strategic role in treating individuals like him.

“I wanted to come up with a theory that would help people be able to work with men,” he said. “And I wanted to understand myself as a man at the same time.”

The no reference group status is characterized by a lack of psychological relatedness to other males.

“In other words, the man really doesn’t feel like other guys,” Wade said. “He feels alienated. This can be because he is confused about who he is as a male—not in terms of whether he is a man or a woman, but in terms of characteristics that our society ascribes to men, like having to be strong, assertive, dominant.”

Wade refers to the second group as reference group dependent, the group that most closely mirrors the “typical guy.” Think Marlboro Man. These men feel psychological relatedness to some men, but not others.

“Group two constitutes a somewhat rigid group; their thinking is, ‘there’s us,’ and then there are ‘other guys,’” he said. Examples of such groupings are men who do sports, successful businessmen who feel entitled, gay men who don’t like the heterosexual macho image, or men who have shared military service and are hawkish.

The final group status, reference group nondependent, consists of men who feel psychologically related to all males. Such men do not depend on other men or the predominant images or stereotypes of men to define their masculinity.

“This group is most fully formed,” Wade said. “The person identifies with all [types of]men, has an appreciation for men’s differences, and, therefore defines for himself what his masculinity is.”

Identifying these groups was just the beginning. Now Wade is applying his theories to study the African-American male. Through a grant from the National Institutes for Health (NIH), Wade set out to discover how well men take care of their health.

From a core group of 208 men with a median age of 37, Wade sought to identify which RGID group practices the most healthy habits. To further specify the “health assessment risk” of the male, Wade separated the group into men who viewed themselves as “traditional masculine” (i.e., homophobic, competitive, restricted with emotion and affection) and those who viewed themselves as “non-traditional masculine” (i.e. comfortable expressing fear, sadness, etc.)

The no reference group men tended to have the poorest health behaviors, the study showed. Except, Wade added, among those who viewed themselves as “non-traditional” in their masculinity.

But the reference group nondependent men, who, not surprisingly, also were the most non-traditional, showed the healthiest scores. These typically consist of older men, educated men, and likely those who are married, said Wade.

“That is where the tree branches off,” Wade said. “In all three RGID groups, a non-traditional masculine attitude was strongly related to good health behavior.

“African American males have the shortest life span of all racial-ethnic groups,” Wade said. “Since the research pinpoints that some negative [health]behavior has to do with how men think about themselves as men, one message that needs to get out is that it’s OK not to be a typical man.”

This messaging can and should start, Wade suggested, through personal physicians and the community-at-large. He cited new advertisements targeting African American men by the National Cancer Society that encourage a healthier daily diet of fruits and vegetables to decrease diet-related chronic diseases.

And to counselors and psychologists who have no reference group patients who are “angry black men,” Wade suggests assessing health behaviors as well as what’s going on inside their heads.

Finally, Wade said that he has learned firsthand the benefit of making a critical self-assessment. “We need to address ourselves as men,” he said. “And then we need to help ourselves.”