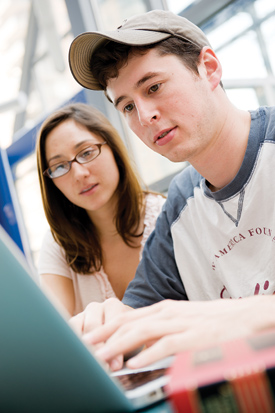 The 2010-2011 academic year was a time of substantial accomplishment in the Graduate School of Education (GSE). Enrollment in regular programs increased beyond expectation, contributing to revenue gains higher than budgeted for those programs. Enrollment in contract and funded programs (e.g., Teach for America, Bilingual Education Teacher Leadership Academy, Title II-A) reached or exceeded projections, again contributing to better-than-budgeted revenue. As enrollment- and budget-related pressures eased, GSE was able to focus more clearly on its goals for 2010-2011 in the areas of accreditation, program review, faculty load, and strengthening the school’s regional and national reputation. As detailed below, much was accomplished in these and other areas. GSE ended the year on a strong footing, academically and financially.

The three primary goals the Graduate School of Education focused on in 2010-2011 were:

Data responsive to NCATE and the needs of specialized professional associations were collected on student and program outcomes and impact using protocols developed by the Program Review and Evaluation Committee of GSE, which oversaw data collection and analysis. A report was prepared and submitted to the NCATE Board of Examiners. The site visit team indicated that GSE has met all of the standards and their components, including having achieved national recognition from all 18 specialty professional associations to which program-level reports were submitted. The NCATE Board of Examiners reviewed the report and issued a response for full accreditation. 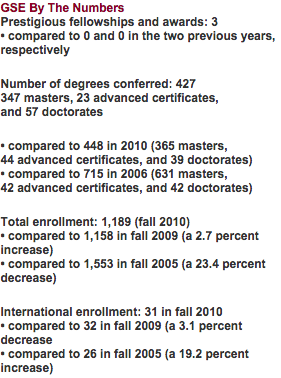 GSE has many partnerships, throughout the area and beyond, with both public and faith-based school systems and the educational organizations that support them. In its biggest partnership, GSE continues to serve New York City as a Partnership Support Organization, providing customized services that help city schools boost academic achievement. The PSO expanded to 25 schools .

Through its Bilingual Education Technical Assistance Centers (BETACs), GSE continued to provide professional development services and technical consulting to teachers and administrators throughout the lower Hudson Valley and the Bronx. The BETACs worked with more than 400 schools and 55,000 English language learners.

Through its Center for Catholic School Leadership and Faith-Based Education, GSE faculty members serve on advisory committees in all three of lower New York State’s dioceses and remain active at all levels of each diocese. The center was awarded a contract to provide courses by the New York City Department of Education under Title II-A ESEA that provides coursework in educational administration to teachers in faith-based schools, primarily in Brooklyn and Queens. The center also has been working with the Diocese of Brooklyn to develop a new accreditation body for Catholic schools and academies. The center’s members were invited to present papers on leadership development for Catholic schools at the Catholic Educational European Conferences (CEEC) in Scotland and England. Upon the recommendation of the CEEC, the center collaborated with the Archdiocese of Vienna and the University of Vienna Institute of Pedagogy to develop a study program in Catholic school leadership for Eastern European countries and the Nordic European Catholic School Community. This program of study was established at the annual CEEC meeting in October 2011.

Through the Rosa A. Hagin School Consultation and Early Childhood Centers, GSE faculty and students are deeply involved in delivering psychoeducational servicesto parochial schools in the South Bronx and Harlem Coalition, a project funded almost entirely by foundations and generous individuals. GSE is recognized throughout the region as a major partner in efforts to improve the quality of education for children in all schools, and is regarded as the leader in bilingual and English language learning in the state.

The Division of Educational Leadership, Administration, and Policy responded to a request for proposals from the Carnegie Project on the Education Doctorate (CPED) to join the second cohort of doctoral degree-level education schools in a nationwide effort to re-establish the value of the doctorate in education (Ed.D.). Participation in the project will entail a full redesign of the current doctoral program in education, a redesign welcomed by the faculty. In late June, GSE was advised by CPED that its proposal was accepted; full participation will begin in the fall.

Meanwhile, a faculty coalition drawn from GSE’s three divisions worked from last June through March to develop a Ph.D. program to replace two doctoral programs that were suspended at the end of last year. A proposal for a doctorate in contemporary learning and interdisciplinary research (CLAIR) was submitted to the New York State Education Department and was recently approved. The first cohort is scheduled for enrollment in Fall 2012.