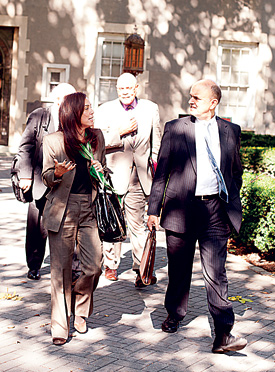 The strategic emphasis of the Graduate School of Business Administration (GBA) during 2010-2011 was to build a value proposition for the constituencies it serves. The three goals of the school during the past academic year were:

A committee of 22 faculty members, representing all areas of the school, systematically reviewed existing programs and divided into smaller task forces to develop new programs for launch in 2011-2012. The new programs are:

• Master in Investor Relations. This program is being offered in two formats during 2011-2012. One was launched in September at Lincoln Center; the other is in collaboration with the National School of Development of Peking University.

• Master in Business Enterprise. This program targets a new and growing market for graduate business, namely, the recent liberal arts graduate. The program is 10 months long and prepares the student for entry-level positions in business and for further study in specialty areas in the curriculum. 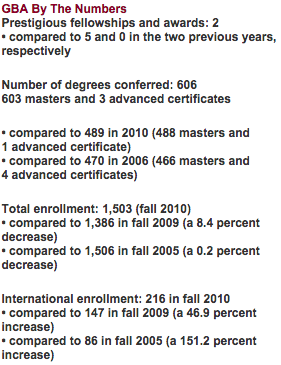 • Three-Continent Master in Global Management. This 12-month program is a collaboration with the Antwerp Management School, Antwerp, and the Xavier Institute of Management, Bhubaneswar, India.

The faculty committee also reviewed the current MBA program and recommended major changes. A small design team is working on a comprehensive revision of the program. The team’s proposals will be circulated among a larger group of reviewers representing the faculty of the school, its alumni, and its advisors.

The school began a “nodal” strategy organized around six regions—Greater China, India, Europe, Turkey, South Africa, and South America—where the school is engaging and mobilizing alumni and cultivating partners in industry, academia and government. In all cases, the significance of carefully selecting academic partners cannot be overstated. They are the key to engaging faculty in collaboration on research and curricular activities. Without meaningful collaboration among faculty, GBA’s global strategy cannot be sustained. For this reason, each academic program of the school has a designated faculty director, who is supported by one of the associate deans as the administrative lead.

The Fordham Consortium is a significant instrument to accelerate and to clarify the execution of a global strategy for the school. Launched in November 2010, the consortium assembles approximately 50 people from different walks of life, from all regions of the globe, three times a year to deliberate on the purpose of business. Additionally, the Fordham Consortium served as a means to help selected faculty members introduce their research to an expansive and critical audience of people who will encourage and promote the scholarly work of Fordham faculty.

A key to solving the placement problem of the school’s graduates and reaching the development objectives of the capital campaign, Excelsior | Ever Upward | The Campaign for Fordham, is to build deeper and much more expansive industry relationships. Although it is important for GBA to make more inroads into New York’s industrial social networks in order to raise the profile of the school, it is arguably more important to expand industry relationships well beyond the metropolitan area.

In January 2011, the GBA Wall Street Council was launched. It meets once a month at the Penn Club, typically with a theme and a speaker. The council has grown to 150 members, and is becoming an important social networking activity for students seeking to build professional contacts.

Additionally, having retained a representative on the West Coast, the school has begun to cultivate prospective employers who have shown interest in the new specialized master’s programs. This initiative has been augmented by a series of breakfast events, held three times a year, at which prominent industry representatives speak to alumni and friends of GBA. At the pilot event, held in San Francisco, more than 70 people came to hear Darcy Antonellis, GBA ’96, speak about the influence of advancing digital technology on business models.