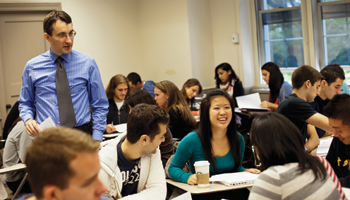 The accomplishments of the Gabelli School of Business (Gabelli) this year in faculty hiring and development, facilities, curricular innovation, administrative efficiencies, strategic planning and student satisfaction all contributed to the development of a true intellectual business community characterized by academic rigor, global participation, and ethics. This community invites students to become highly professional, socially responsible global leaders. Here are highlights of Gabelli’s ongoing work in four areas of focus:

Within the last 12 months, the University dedicated a home for the Gabelli community in Hughes Hall. This building, at the center of campus, will bring students and faculty together for the first time under one roof, in modern, technologically enhanced classrooms.

Gabelli continues to attract and retain students of ever-greater caliber. The school is receiving more applications overall: 5,900 for the Class of 2015, an 18 percent increase over the previous year. The school is also becoming more selective and accepting fewer applicants: 43 percent were admitted, down from 52 percent the prior year. The average SAT score for this fall’s incoming class was 1242, continuing a five-year upward trend. Student yield for those with SAT scores above 1350 increased from less than 10 percent in 2010 to more than
16 percent in 2011. Both the freshman and overall retention rate hover around 93 percent.

The centerpiece of Gabelli’s academic work is the integrated business core, which faculty members are developing and expanding toward complete implementation by 2013. The core has many moving parts, the first of which is The Ground Floor course. This year for the first time all freshmen took this course, in which faculty and corporate leaders introduce business students to each of the sectors in the Gabelli curriculum. The class is writing intensive and speaking intensive, featuring weekly papers graded by graduate students in English. It culminates in a team project of creating a business plan.

Similar to FCRH, Gabelli has seen the first fruits of its efforts to ramp up undergraduate research. Students in the Global Business Honors Program and the Senior Honors Thesis Program worked under the guidance of full-time and adjunct faculty to delve into business subjects that interested them, and 25 students presented a total of 14 projects at an undergraduate research day that brought their work to the attention of the wider University community. Gabelli will work to make undergraduate research simultaneously more commonplace and more extraordinary: commonplace in terms of how many students pursue it, extraordinary in terms of its quality. To advance those goals, the school established a working papers website where students can post and revise drafts with professors’ help, and a student academic journal, to be published in 2012, that will bring completed papers to the attention of business schools, prospective employers, alumni and others.

Administrators and faculty collaborated to plan two new academic programs for launch in fall 2011: a revitalized program in entrepreneurship and a minor in sustainability. These programs offer opportunities for partnerships with Fordham College of Rose Hill and with outside organizations and businesses, such as Google.

Gabelli’s strategy has a dual focus: sending Gabelli students out into the world, and bringing the world to Fordham.

On the export side, with the addition of a fall term, Gabelli established a full-year cycle—fall, spring, and summer—at the University’s satellite campus in London. The new fall London semester is designed to appeal to marketing majors and business minors. In addition, the approach to one- and two-week study tours was refined, turning them into thematic country visits attached to rigorous business courses and grounded in the overall curriculum. The tours have also been enhanced through partnerships with Jesuit universities in the countries that the students visit. Students have shown enthusiasm for global learning: 256 Gabelli students did some type of study abroad in 2010-2011, a full 25 percent more than in the previous year.

On the import side, the number of international students who call Gabelli home increased from between 1 and 3 percent to a Class of 2015 with 10 percent international students—exactly the target set. Gabelli has sought to integrate international students into the life of the school by identifying their particular needs to ensure a successful transition and by having special gatherings for them when possible. Finally, Gabelli increased the parameters for the popular GLOBE program, now requiring students who are pursuing an international certification to gain more thorough expertise here on campus. They now must demonstrate proficiency through the Intermediate II level in a language related to their chosen target country.

Gabelli made progress in cultivating a network of personal and professional support that begins even before a student’s first day of freshman year, and continues into the later stages of his or her career.

The school devised a summer shared-learning experience to sharpen students’ focusbefore they arrive on campus. Gabelli also gave attention to how to serve freshmen at orientation and revised that day accordingly. Orientation for August 2011 was based on the idea of “Ignite”—calling to mind the personal and professional development program of the same name that students will soon enter—and aims to spark their interest in business, in Fordham and in making a difference in their own lives and in society.

For students in the midst of their study at Gabelli, student leadership opportunities were enhanced and a greater value placed on taking leadership roles. The school worked more closely with student clubs and organizations to help these groups fulfill their potential as avenues toward personal and professional development. Better advising services were offered, especially for students considering a law degree after graduation.

Gabelli implemented a school-specific approach to job placement which will supplement the work of the University’s career services. Gabelli added new workshops, offered online résumé reviews, posted online guides for juniors, and held events such as Access Your Career Week. Students were encouraged to seek professional exposure as often as possible, from policy symposiums in Washington, D.C., to speeches by Warren Buffett for female student investors at the headquarters of Berkshire Hathaway. More than 100 new corporate recruiters were enlisted to help Gabelli students find jobs, and the number of internships available for students was expanded. The school began building an online networking and mentoring community for Gabelli alumni, beginning with the most recent graduates, with the intention of moving up gradually into the alumni ranks.

Among the most crucial efforts of the business faculty was the pursuit of a healthy balance, in all courses, of theoretical and practical approaches. Students need to understand the theory behind the business disciplines they study, but they also need to have access to in-class exercises, projects, and hands-on applications that will prepare them for the real-world work they will do as interns and, eventually, as professionals.

Faculty were motivated to incorporate team-based projects and collaborative learning as much as possible into their classes, since students will need to function effectively as team members when they graduate, especially in entry-level roles in large corporations.

In order to fulfill Gabelli’s commitment to create a culture of assessment, the faculty assessment coordinators developed and implemented course-embedded measures of learning. These quantitative and qualitative assessments guided refinements to the curriculum. Based on data from observation reports, course work, student surveys, and other instruments, student assignments were revised to incorporate more analytical thinking and global perspectives.

Finally, Gabelli continued to foster the use of cutting-edge technology in the classroom. Faculty were asked to consider how blended learning—an in-person/online hybrid—might figure into their future courses. To begin moving in this direction, several courses were videotaped in their entirety, as well as several lectures, all of which are now available online.

Gabelli School of Business At a Glance

GSB By The Numbers

Prestigious fellowships and awards: nine
compared to six and three in the two previous years, respectively

As of July 25, 2011, 72 percent of the 2011 Senior Class responded to the survey.
Of those, 70 percent have either secured employment or will continue onto school (graduate school as well as the 5th year undergraduate). The results show: