The major goal for the dean of Fordham College at Lincoln Center during the 2010-2011 academic year was to articulate a vision of what FCLC could become over the next five years as new construction is finished and space becomes available for the college. 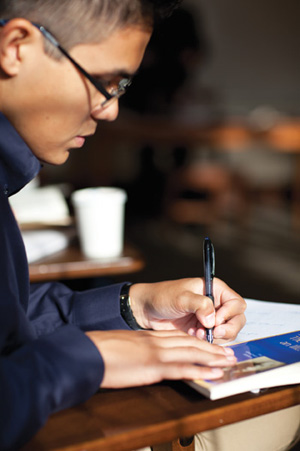 New programs underway and planned would also attract additional students. The new International Studies major has proven to be rigorous yet popular and is supported by offerings in modern languages. The larger student body would allow for additional languages to be offered. The Humanitarian Affairs minor has also proven to be extremely attractive to students, with its first cycle being completed in 2011-2012. The music major has increased student interest in the field. FCLC’s growing relationship with The Juilliard School allows the college to move into new areas such as music technology at minimal expense.

Administrators are holding discussions with the Graduate School of Business Administration about developing attractive programs for liberal arts undergraduates preparing to move into the business world. The new FCLC pre-business program has attracted students from many different majors ranging from art history to economics to math to natural science. In addition, social work is now offered as a freestanding major.

The theatre program would also benefit from a larger student body. While the acting and the playwriting tracks would remain stable in enrollment, there is significant room for growth for production and design as well as theatre management. In cooperation with the Graduate School of Arts and Sciences and Primary Stages, the department will begin to offer an MFA in playwriting. The new leadership at the Ailey School is also interested in the development of an MFA in choreography at Fordham.

The second major goal of the year was the institution of the Matteo Ricci Seminars, designed to prepare exceptionally talented students for prestigious fellowship applications. Ten students participated this year.

The seminars included a variety of activities, such as an invitation to the Board of Trustees luncheon in September and attendance at a reception at the Links Club in October, hosted by the Prestigious Fellowship Advisory Board. The group had a dinner and discussion in October with Michael Martin, dean of Fordham Law School and Distinguished Professor of Law, and a former Rhodes Scholar. The group also attended a dinner and discussion featuring Armen Meyer, FCLC ’98, a graduate of Harvard Law School who has extensive experience in public service. He led a discussion on the sacrifices and rewards connected to public service.

In February, the seminar invited David Rothman, Ph.D., of the Columbia College of Physicians and Surgeons, and Sheila Rothman, Ph.D., of the Mailman School of Public Health at Columbia University, to join them for dinner and discussion. In March, the group was joined by Brendan Cahill, executive director of the Institute of Humanitarian Affairs. In April, the FCLC and FCRH seminars were invited to a colloquium and dinner hosted by Winston Churchill, FCRH ’62, and Joseph M. McShane, S.J., president of Fordham, in Tognino Hall at Rose Hill.

Over the course of the year, faculty and administrators saw students bonding into a cohesive and mutually supportive group. In addition, their ability to speak in both social and formal settings developed impressively. The seminar’s organizers were more than satisfied with their progress and willingly volunteered to continue meeting with the group in their junior year.

Thus, the Matteo Ricci Seminars serve not only as preparation for prestigious fellowship applications, but also a tool for retention of the college’s best students.

The college has been encouraging and acknowledging student research since 2001 when it began the custom of highlighting student research with the fall and spring research fairs. In the summer of 2011, FCLC expanded that program by offering summer stipends to students to engage in substantial research projects. A faculty committee was formed and they developed guidelines for a pilot program. The total of the stipends is $35,589 and was paid from the Mellon endowment. Students presented their research projects at the college’s fall research fair.

In the fall 2011 semester, four Fordham students took courses at The Juilliard School. The first faculty exchange with Juilliard took place in the spring semester of 2011. Brian Johnson, Ph.D., assistant professor of philosophy at Fordham, taught ancient philosophy at Juilliard, and Mitchell Abulafia, Ph.D., chair of the Juilliard liberal arts department, taught American Pragmatism at FCLC. The college is planning another exchange for spring 2012.

Fordham College at Lincoln Center
At a Glance

Prestigious fellowships and awards: 13
compared to 12 and 21 in the two previous years, respectively