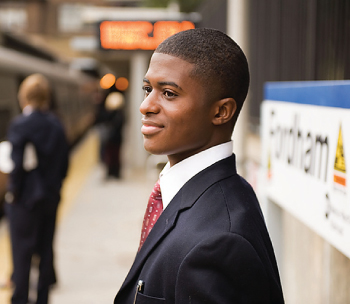 The Gabelli School of Business is an intellectual business community defined by high academic standards, global participation, and ethics: one in which students become socially responsible global leaders. Faculty and administration pursue four main initiatives: to foster academic excellence through the integrated core curriculum and applied learning; to create a global business education by forging new international connections and encouraging students to see beyond boundaries; to help each student develop as a whole person; and to cultivate a business faculty whose classroom approaches and research define them as innovators.

In 2012-2013, the Gabelli School grew on several fronts. Faculty and deans developed a plan for the new bachelor of science in global business program that will begin at Lincoln Center in fall 2014, choosing four business concentrations that reflect growing fields and working with FCLC to make the most of common academic interests between business and liberal arts students. The integrated core curriculum, introduced in fall 2009 as a pilot program, graduated its first seniors. Students and faculty embraced globalization in new ways and with new enthusiasm, leading to a tangible shift in the perceived importance of international study. Hughes Hall opened as a state-of-the-art home for the school and became a point of pride for the entire campus.

The Gabelli School’s academic program has attracted growing national attention as a model for business education. The school rose nine places in the Bloomberg Businessweek ranking of undergraduate business schools, placing No. 40 nationwide in 2013. This included a jump to No. 20 nationally in academic quality, from No. 33 the year before, and a significant advancement in the eyes of recruiters and employers who hire its graduates. Businessweek’s ratings of the Gabelli School’s teaching quality and job-placement record remained at A. The school ranked in the national top 25 in six of 14 business specialty areas: international business (7), marketing (11), corporate strategy (16), finance (17), sustainability (22) and entrepreneurship (25).

Applied learning is one of the hallmarks of a Gabelli School education. Class assignments in 2012-2013 mirrored what students eventually will do as professionals. Sophomores in the integrated business core identified the biggest marketing obstacles facing major companies and worked in teams to develop and present original solutions, often thinking globally about avenues toward new markets. Juniors performed under pressure in front of evaluators to address the kinds of communications challenges that business leaders face. Students participated in national competitions that asked them to tackle complicated case studies, actual marketing problems, or the issues facing the U.S. economy. Several Gabelli students also applied their learning through the business faculty’s research centers: undergraduate fellows at the Center for Digital Transformation explored plans to make the Bronx into a new high-tech corridor for New York City, and practitioner fellows at the Center for Positive Marketing conducted market research with faculty guidance. By graduation, on average, 91 percent of Gabelli students hold internships.

Central to the Gabelli School curriculum is the dual core: a liberal arts core and the new integrated business core. For the first time, the entire freshman and sophomore classes were enrolled in the integrated business core. Of the more than 50 senior pioneers who were the first to complete all four years of the core in 2013, nearly all reported feeling prepared to approach their first jobs with the 12 cross-disciplinary capacities it was designed to give them: analytical skills, career planning, entrepreneurial thinking, modes of ethical thinking in business, global perspective, integrated business thought, leadership, presentation skills, self-awareness, teamwork, technology, and writing ability. The academic program as a whole continued to expand with new secondary concentrations in alternative investments and sports business. Both of these rigorous concentrations feature a capstone component: a research, internship or travel experience. Other specialized programs in entrepreneurship and sustainable business grew as well.

This past year saw twice as many Gabelli School students participate in local service learning, in which they chose a nonprofit organization and executed a service project on its behalf in sync with one of their existing business courses. A record number of students volunteered as tax preparers for underprivileged Bronx residents in the VITA program. Outside speakers such as Chris Lowney, author of the book Heroic Leadership, reinforced the idea that Fordham business students have an especially great responsibility to conduct business in ways that benefit other human beings.
As Hughes Hall opened in August 2012, it began to shape the academic environment by enabling greater collaboration: among students, between students and their professors and deans, and among faculty. All have benefited from the building’s dedicated spaces for cooperative work, group meetings, and Skype-enabled discussions. Academics in 2012-2013 enjoyed a renewed sense of energy, enthusiasm, and pride as Hughes Hall ushered in a new era at the Gabelli School of Business.

The Gabelli School’s globalization efforts are twofold: to provide more options for international study and to emphasize global experiences as a crucial part of business education. The school expanded existing full-semester and summer-long study-abroad programs, developed new study tours, and sought to make it more feasible for students to choose an international experience.

The centerpiece of this effort is Fordham’s London Centre, which offered additional coursework in fall 2012 enabling students to take upper-level courses toward their majors. A KPMG partnership created a total of six annual London-based accounting internships, and mentors in London were identified for marketing majors. Thanks to these efforts, enrollment doubled in London in fall 2012 compared with the year before.
In collaboration with the Office of Development and University Relations, the Gabelli School created new scholarships for study abroad, and study tours offered short-term experiences for students unable to opt for a full semester or summer abroad. In 2012-2013, faculty-led groups went to Brazil, India, and Ireland, the first two of which were linked directly to a full-semester business course at Rose Hill.

Academics at the Gabelli School became more global as faculty improved international content in existing law and ethics, information systems, and management courses and also introduced new classes, such as Global Tax. The secondary concentration in international business, formerly known as the G.L.O.B.E. program, strengthened its requirements. Students now must align their coursework, language proficiency, and international study around a specific nation or region and complete a set minimum of study abroad.

Fordham received national attention in the AACSB’s BizEd magazine for the new international student orientation that represented a collaborative effort among many schools and departments, including the Gabelli School. International Business Week shone a brighter spotlight on the home lives of international students by giving them the chance to present their own countries to their peers.  A new freshman advising session promoted the advantages of developing cross-cutural perspectives for all Gabelli students. This two-way interaction with students from abroad will remain a school priority in 2013-2014.

The coming year will challenge the Gabelli School leadership to think creatively and intensively about what international education can be, as plans are finalized for the bachelor of science in global business program that will open at Lincoln Center in 2014.

The Gabelli School’s Personal and Professional Development Center collaborated with Fordham’s career services office to support University-wide programming and supplement it with programs tailored to meet the needs of business students in an integrated way over their four years. The new Boardroom Series offered students a better chance at making personal connections with alumni. The Alumni/Student Supper Club provided small-scale networking dinners for one alumnus or alumna and four to five students. A Young Alumni Marketing Roundtable attracted recent graduates to talk to current students about their first years in the working world. Alumni advisory board members now are required to hold at least one student personal and professional development event during their three-year terms.
In recognition of the Gabelli School’s Jesuit philosophy that personal and professional development is about self-discovery, the freshman class dean introduced advising sessions to help students identify personal goals and interests.  A new structure for peer advising matched freshmen with upper-class advising assistants, and students participated in Ernst & Young’s social-justice-focused “Your World, Your Vision” program, which has since been discontinued by the firm.

Many business professors engaged more deeply in blended and technology-enabled learning. Outside experts visited the Gabelli School in January to offer a teaching workshop, and faculty began to use a technique known as “flipping the classroom.” Having students take quizzes online before class, for example, yields more discussion time. A campaign was begun to encourage faculty to record their Hughes Hall-based classes using the Echo360 system, enabling students to review lectures and improve the way they prepare for exams. Bloomberg terminals allowed for a greater flow of data in financial courses, and high-tech control consoles let faculty conduct in-class demonstrations. Computer simulations became a more regular feature of the curriculum: in the senior core, students took control of a simulated company and made management decisions related to production, pricing, corporate image, and other factors.

In the coming year, the Gabelli School will redouble fundraising efforts through collaboration with the Office of Development and University Relations to ensure that the school’s mission can continue at full strength and expand into new areas.

GSB By The Numbers

Prestigious fellowships and awards: 4
compared to 2 and 9 in the two previous years, respectively