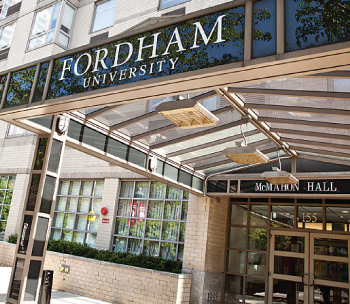 Fordham College at Lincoln Center (FCLC) completed its 45th year in 2012-2013. It is successor to a number of Fordham schools in Manhattan since the one founded by John Larkin under the Fordham charter in 1847. Just as American higher education is in a time of significant transition, major changes are on the fall 2014 horizon for FCLC with the expansion of the Lincoln Center campus and the opening of a new undergraduate residence.

The 2012-2013 school year was in many ways a most successful year. At the beginning, Colum McCann, author of Let the Great World Spin, the book that new students read during the summer, spoke at Freshman Orientation and challenged students to “imagine yourself into the lives of those who do not have your advantages.” This is one of the 33 items contained in the “Pledge for the Class of 2016” that Mr. McCann compiled for the students.

Other highlights include the Matteo Ricci Seminar for FCLC’s most talented sophomore students. The presence of prominent alumni enriched many of their meetings. The FCLC Mock Trial Team, mostly underclass students, won first place in regional competition and fifth place in the qualifying round of the national finals, and competed in the finals against some of the best teams in the country. Experience Fordham, which brings some of the most talented accepted students to campus, yielded the largest group ever.

FCLC hosted the Arts and Sciences Faculty Day, which included a presentation by Professor Larry Stempel of the Department of Art History and Music on the work of composer Richard Rodgers, including the music of Carousel. After dinner, the Ailey/Fordham dancers performed a newly choreographed version of the Carousel Waltz.

It was also a successful year in fundraising for the college, including a $2 million gift from Mary Higgins Clark (FCLC ’79) to establish the Mary Higgins Clark Chair in Creative Writing in the Department of English and a $500,000 gift from Gilbert and Ildiko Butler (FCLC ’85) to the Visual Arts Department to enhance and sustain the gallery at Fordham College at Lincoln Center and provide student grants.

Preparing for the Changes in 2014

FCLC faculty and administration engaged with great energy and urgency the task of creating new and revitalized academic programs to attract an expanded pool of talented students to FCLC in 2014-2015. The programs developed and approved include a major in humanitarian studies, an interdisciplinary major in new media and digital design, a concentration in music theatre, and a new minor in fashion.

The new bachelor of arts in humanitarian studies degree at FCLC is a mission-driven program which will draw on established academic strengths at Fordham as students learn to bridge the gap between theoretical and practical responses to international humanitarian crises. The program includes an innovative international component culminating in a two-week service-learning immersion project in another region of the world. The bachelor of arts in new media and digital design program is also interdisciplinary in focus and offers students an opportunity to develop a knowledge base and leadership capacities in rapidly expanding and interrelated fields. Once suitable facilities can be developed, a new concentration in music theatre will enrich FCLC’s nationally regarded Theatre Program and build on its partnerships with other NYC arts institutions. Capitalizing on NYC as one of the major fashion capitals of the world, FCLC’s fashion studies minor is distinctive among other area programs in its grounding in a four-year liberal arts curriculum. The program will provide a strong foundation in both design and business, with courses that approach the study of fashion from multiple disciplinary perspectives.

An Increased Presence for FCLC in the Lincoln Square Neighborhood

FCLC continued to become a more significant presence in the neighborhood. Thanks to the school’s relationship with the Rubenstein Atrium at Lincoln Center for the Performing Arts, the Fordham Alumni Theatre Company presented the premiere of a new musical version of Henry James’s Turn of the Screw, with a book by Michael Kimmel, FCLC ’99, and a cast made up of FCLC alumni and one current student. In November the Ailey/Fordham Dancers performed at the atrium and drew standing-room only crowds.

Expansion of the Music Major

The music major continued to grow in 2012-2013, enriched by the long and mutually beneficial relationship that FCLC has developed with The Juilliard School. In the spring semester, there were 36 students registered as music majors, including some of FCLC’s top students. Twelve members of the class of 2017 have indicated their intention to be music majors. Five Fordham students registered for classes at The Juilliard School evening division during the academic year. Once again, Bill Baker, Ph.D., the Claudio Aquaviva Chair and Journalist-in-Residence in the Graduate School of Education, taught a joint Fordham/Juilliard course, The Performing Arts in the 21st Century, in the spring semester. In other academic areas, Professor Edward Bristow of the History Department taught a course at Juilliard on the Holocaust, while Gonzalo Sánchez of the Juilliard faculty taught a Modern European history course at FCLC. Both faculty members were warmly welcomed by their colleagues in the school they were visiting.

Professor Daniel Ott of the Department of Art History and Music received a Goddard Lieberson Fellowship from the American Academy of Arts and Letters. These fellowships are given to “mid-career composers of exceptional gifts.” Five of the Fordham students in Professor Ott’s composition workshop heard their works performed by professional musicians, The Exponential Ensemble, on May 2. The work of one FCLC student, Charlie Martin, was chosen by the musicians to be performed at their concert the following evening at the Dimenna Center.

Over the course of the year, a number of chamber music ensembles were professionally coached. They were joined in the spring semester by five small jazz ensembles that practice in space provided by Jazz at Lincoln Center. The jazz ensembles are coached by Matt Butterman of Jazz at Lincoln Center, and FCLC is in discussions to formalize cooperation with a memorandum of understanding. During the 2012-2013 academic year, the revenue sharing plan for the Ailey/Fordham BFA was favorably renegotiated.

In July 2012, students in Fordham’s International Study Abroad Program were based in Rome at the Irish College for a class, Acting in Italian, co-taught by Professor Joseph Perricone, Ph.D., of the Department of Modern Languages and Literatures and Matthew Maguire, director of the Fordham Theatre Program. The group performed Dario Fo’s farce, “Non Tuttii i Ladri Vengono per Nuocere” (Not All Thieves Come to Harm You) in Orvieto and Rome to enthusiastic and appreciative Italian audiences. During their stay, the class was thrilled to accept an invitation to the home of 86-year-old Dario Fo, the 1997 Nobel Prize for Literature winner. The program was repeated in the summer of 2013.

Bernard Moore, FCLC ’13, and two Rose Hill students, Matt Ecker and Steven Rice, received summer research grants to travel to Namibia in southern Africa and make a documentary on Chinese investment in that country. They met many of the political leaders of Namibia, including the current prime minister, Hage Geingob, FCRH ’70. Excerpts from their documentary were shown at the FCLC Research Fair in April 2013.

Other opportunities for international study included the second Foreign Service trip of the Humanitarian Studies minor to Nicaragua in January 2013; a trip to Russia sponsored by the Theatre Program for students interested in costume design; and a study tour to China in June 2013 led by the director of the International Studies Program.

Prestigious fellowships and awards: 22
compared to 23 and 13 in the two previous years, respectively

All Doctoral Level Health Professional Schools (US and Non-US): 83.7 percent