Editor’s Note: This is the first in a series of articles on academics to be published inInside Fordham, beginning with undergraduate education. 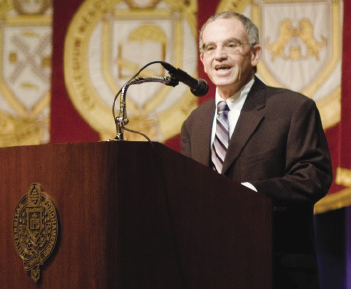 Office of the Provost

The 2010-2011 Annual Report for the Office of the Provost highlights the accomplishments of the academic units of the University and provides a detailed account of the state of the schools. It lays the foundation for achieving the academic priorities of the provost for the 2011-2012 academic year, which emphasize the vision for a global curriculum, partnerships (in particular, the development of a Bronx Science Consortium), academic programming, academic financial planning, and faculty capacity and research, among others.

During its first year of operations, the Office of the Provost implemented the initial phase of integrated academic budget planning, focusing on the alignment of resources with the University’s mission, strategic goals, and assessment. It also supported the successful completion of the Middle States Periodic Review Report, which highlights assessment of student learning outcomes and mission integration at all levels of academic planning. The Office of the Provost and the academic departments also made significant progress on a broad range of initiatives supporting the University’s strategic vision articulated in Toward 2016, which focus on academic rigor and quality. Though the University pursues academic excellence for its own sake, one intended effect of these efforts is for Fordham to rank in the top 25 nationally in U.S. News & World Report’s “America’s Best Colleges” rankings. The 2012 edition ranks Fordham at 53, an improvement from 56 in 2011 and significantly, an improvement from 84th place in 2002.

FCRH is at a moment in time when dramatic advances are possible.

The accomplishments of the Gabelli School of Business (Gabelli) this year in faculty hiring and development, facilities, curricular innovation, administrative efficiencies, strategic planning and student satisfaction all contributed to the development of a true intellectual business community characterized by academic rigor, global participation, and ethics.

The major goal for the dean of Fordham College at Lincoln Center during the 2010-2011 academic year was to articulate a vision of what FCLC could become over the next five years as new construction is finished and space becomes available for the college.

The top three goals for the Fordham School of Professional and Continuing Studies (PCS) in 2010-2011 were: to forge a new identity for the school, to develop new curricular initiatives, and to establish stronger relations with the faculty and chairs of departments at the three campuses.