Editor’s Note: This is the second in a series of articles on academics to be
published in Inside Fordham. The first, a report on undergraduate edcution,
appeared in the Jan. 17, 2012 issue. 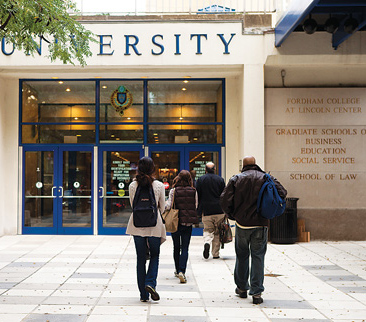 Advancing Graduate and Professional Education
The 2010-2011 academic year saw many innovations and new partnerships in graduate and professional education at Fordham.

There were updates and changes in degree offerings across the University, ranging from the development of an online master’s in social work to the launch of four new master’s programs in business, all of them attuned to new market demands. A reexamination of the doctorate in education took root, part of a nationwide effort to reassess the degree’s value. Meanwhile, Fordham forged new collaborations—within the University, and with universities in New York, across the country and abroad—to prepare students for today’s global economy and expand their opportunities for learning. Graduate programs grew more selective, improved their rankings, found inventive ways to raise their profiles, and revised their curriculums to stay abreast of new global realities.

Since the publication of Toward 2016, the overarching goal of the law school has been to advance “to the level of accomplishment and recognition that warrants ranking as one of the 15 best in the nation.”

Graduate School of Arts and Sciences

TThe 2010-2011 academic year was a time of substantial accomplishment in the Graduate School of Education (GSE).

In keeping with the new mission of the Graduate School of Social Service (GSS), which embraces human dignity, diversity, and social justice, the faculty adopted human rights and social justice as the organizing construct of the curriculum beginning in academic year 2011-2012.

The strategic emphasis of the Graduate School of Business Administration (GBA) during 2010-2011 was to build a value proposition for the constituencies it serves.

The vision and direction of the Graduate School of Religion and Religious Education (GRE) are laid out in its strategic plan for 2010 to 2012, which guided faculty meetings and curricular reviews in the 2010-2011 academic year.