skip to main content
Return to Fordham University
You are at:Home»Inside Fordham»Providing Career Insights Throughout School and Beyond Graduation 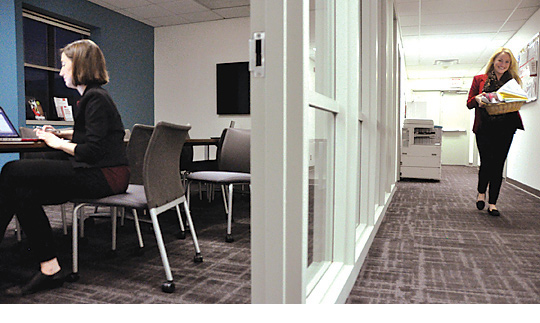 Getting recent graduates to update career profile surveys has always proved a challenge for any university.

The National Association of Colleges and Employers recommends shooting for a 65 percent response rate for such data, which is also used in determining college rankings.

In 2013, Fordham had a 55 percent response rate. So when Fordham’s Office of Career Services recently reported a response rate of more than 90 percent from the Class of 2014, it was enough to make other universities take note and ask what the folks at Fordham were doing right.

Most universities gather job placement information at graduation, but follow-up is often weak, with data rarely being updated.

All that changed at Fordham when an anonymous donor took a serious interest in career services, and wanted to spur real change.

And while some of the changes are obvious, like career services’ new facilities at Rose Hill, other powerful changes are behind the scenes, like the implementation of a new technology platform called CareerInsights, which organizes the data.

“We had to have a system that gave us real-time data, and students having access was just a dream,” said Stefany Fattor, director of career services. “We bought the platform and worked with the institutional research department to formulate the questions, many of which were mission-driven, like how many people go into service upon graduating.”

Nationwide, reporting job placement based on less than a 100 percent response rate is common practice. But the incomplete data does not necessarily reflect what’s actually going on with graduates, said Bernie Stratford, director of experiential education. Some students may have found part-time jobs but are continuing to look for permanent positions. They’re actually still looking for work, but the data says they’ve found a job.

The career services office has responded by aggressively pursuing students during and after graduation to find out where they are and what they need. This past spring the staff used pencil-and-paper surveys to gather information from seniors as they arrived to pick up their caps and gowns for graduation. The process provided detailed information on nearly 1,200 of the 1,938 graduates. The survey responses were then entered into CareerInsights.

Questions were also tailored to focus on the core curriculum experience for all undergraduates, business and liberal arts students alike—the Gabelli School of Business students participate in one of the most liberal arts-enriched business curriculums in the country. With the ultimate goal of a 100 percent response rate, current students will be able to refer to CareerInsights when picking a major and ultimately a career.

“The Class of 2018 will have an enhanced and robust database where everyone has a file,” said Stratford. “This will be a viable tool where students can go in and show to their parents the career history of, say, all the philosophy majors at Fordham. It will assist us in transforming the perception and the power of the liberal arts in today’s marketplace.”

“This is where the real value of the new system comes in,” said Fattor. “We had real-time data on those students still seeking jobs and we were able to reach out directly to them.”

This year’s freshmen were introduced to CareerInsights after beginning their first installment of Fordham Futures, an “introspective, nonlinear, career planning and professional program” that spans all eight semesters that students attend Fordham.

“In the end this is really all about school spirit, because when students open and update their CareerInsights accounts, they help themselves, their classmates, and their school,” said Stratford. “So if a junior has an internship or two, I tell them to put it in the system, share the information.

“As an institution, what we’re doing will change the culture of career services. At 100 percent response, we will get honest data,” he said. “It may not be as flattering [as a 65 percent response from job holders], but instead of looking the other way, we’ll be able to help graduates who haven’t found work. And while we’re moving on with our current students, we’re not abandoning alumni.”