skip to main content
Return to Fordham University
You are at:Home»Inside Fordham»Progress of Haitian Relief Effort Highlighted by Panel 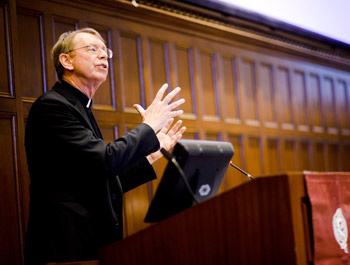 Ken Gavin, S.J., says that God is present even in the most difficult and tragic human events.
Photo by Ryan Brenizer

With rescue teams working feverishly to stabilize Haiti in the aftermath of a massive earthquake, Fordham’s Institute of International Humanitarian Affairs (IIHA) convened a panel to address the scale of the disaster and the ensuing humanitarian response.

In assessing the performance of agencies such as the United Nations and non-governmental organizations that have converged on Port-au-Prince, it was noted that there has been a lot of progress in coordinating efforts since the 1960s.

Also on the panel was Paul Browne, deputy commissioner of public information for the New York Police Department and deputy director of the international police monitors in Haiti. His experience includes helping establish an interim police force in Haiti during the United States-led “Operation Restore Democracy” in 1994 and 1995.

Browne told the auditorium of about 200 students that although media images might portray Haiti as being rife with looting and rioting, he did not expect the security situation to deteriorate rapidly, explaining that the Haitian people are some of the most law-abiding he has encountered.

In the days following the United States’ restoration of President Jean-Bertrand Aristide to power in 1995, Browne encountered large crowds bent on revenge against members of the previous regime. Browne convinced the crowds to let international police monitors arrest the perpetrators instead of taking violent action, he said.

“A crowd of 100 didn’t have to comply with these international police monitors, especially when there were only two or three of us,” he said.

Ken Gavin, S.J., national director of the Jesuit Refugee Service, U.S.A., showed how his group, which had been working out of Haiti and the neighboring Dominican Republic before the earthquake, is doing its part.

To give a sense of how bad the situation is, he noted that the drive from Santa Domingo in the Dominican Republic to Port-au-Prince, which used to take six hours, now takes 12 hours. He also echoed many others in saying that the country’s suffering did not start on Jan. 12, and will not end on the next Jan. 12, either.

“What JRS tries to do is affirm that God is present even in the most difficult and tragic human events,” he said. “That is why we are here in Haiti. We see in the faces of tragically suffering people the very face of God, calling us to be in his presence.”

Joseph McShane, S.J., president of Fordham, used the occasion to announce that the University will direct its efforts toward raising money for Catholic Relief Services and the Jesuit Refugee Service.