skip to main content
Return to Fordham University
You are at:Home»Inside Fordham»Programs and Departments Thrive from Campaign Bounty

The success of Ever Upward | Excelsior | The Campaign for Fordham has made an impact on many facets of the University, but its effects on academic programming has been both subtle and, at times, grand. Here’s a look at how the funding has supported select programs.

Fordham received its largest-ever award in the humanities when the John Templeton Foundation gave $3.5 million to support the research of philosophy professor Stephen Grimm, Ph.D. The grant, titled “Varieties of Understanding: New Perspectives from Psychology, Philosophy, and Theology,” will fund a three-year interdisciplinary study of human understanding.

Through the generosity of Solon and Marianna Patterson, the Orthodox Christian Studies Centerhas been able to hold an academic conference every three years, bringing the world’s most important Christian thinkers to the Rose Hill campus. Titled the Patterson Triennial Conference on Orthodox/Roman Catholic Dialogue, lecture topics have ranged from Democracy under Constantine to Orthodox Constructions of the West. The couple’s $300,000 challenge grant brought in an additional $200,000, making for a $500,000 initial endowment. The pan-Christian conversation has so far produced two books that are on the required reading list for the College of Cardinals. 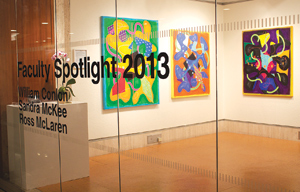 The Ildiko Butler Gallery gift enhances programming in the Department of Theatre and Visual Arts.

The re-christening of the Fordham College at Lincoln Center’s (FCLC) Center Gallery as the Ildiko Butler Gallery was made possible with a $500,000 gift to FCLC’s Theatre and Visual Arts Department from Ildiko Butler, FCLC ’85, and her husband Gilbert Butler. While half of the gift is intended to sustain the gallery, half is set aside as scholarships for students to travel abroad, gain exposure to a different culture, and develop their artwork.

Since 2008, the Reid Family Writers of Color Reading Series has brought celebrated writers of color to both Fordham campuses. Events have included readings, master classes, and panel discussions. The series was made possible through a gift from Kenneth and Frances K. Reid, whose son, Keith, is a senior. The next reading will be on April 24 and will feature poets Tracy K. Smith and Vievee Francis.

For the past two years the Graduate School of Business Administration (GBA) has received over $2 million from the NASDAQ OMX Educational Foundation, which helped support the growth of GBA’sMaster of Science in Global Finance (MSGF) program and a Master of Science in Investor Relations. The expansion of the MSGF builds on the program’s early success, particularly in Beijing.

Another project that carved out student space came from a $500,000 gift from PricewaterhouseCooper to create the PwC Student Lounge and Study Area at Gabelli. Newly appointed Fordham trustee Don Almeida was instrumental in securing the gift.

After a four-decade career as an educator, Valerie Rowe, Ph.D., GSE ’96, came to Fordham to get her doctorate. She eventually went on to teach at Fordham’s Westchester campus, where she was instrumental in coordinating its Masters in Science of Teaching (MST) program. From her time at Fordham, Rowe understood that many students going into the program came from other careers, something she admired. Together with her husband, Jack Rowe, the couple made a $200,000 gift to help MST students make the life-changing transition to teaching.

AT&T’s $200,000 gift has allowed the University to continue to reach out to its neighbors through theMentoring Latinas Program. The company’s gift helps Latina students from Rose Hill mentor teenage girls from the neighborhood. With nearly 41 percent of Latina students not graduating on time, having an amiga to look up to can make a huge difference.

At the Graduate School of Arts and Sciences, a $300,000 gift from Sovereign Bank/Santander Universities helped establish the Santander/Fordham Ethics and Society Scholarship and theInternational Internship initiatives.

At WFUV, a $241,000 grant from the Agnes Varis Trust covered expenses of live broadcasts at the station for two years.

While the specific donations went to specific causes throughout the campaign, $100 here and $25 there, much of it funneled through the Fordham Fund, found its way to a variety of academic programs. At the Gabelli School of Business, such funds went to support the Global Business Honors Program, where Gabelli students experience international business on location in the world’s finance capitals. The funds also fed the programmatic development of the Student Management Investment Fund, where each semester, 24 students invest $1 million dollars of the University’s endowment, making donors money grow.