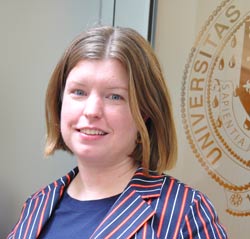 The 17th century was an exciting time for Spanish explorers, as sailors embarked on voyages that would take them far away from Europe. Now, Sara Lehman, Ph.D., assistant professor of modern language and literature, is bringing stories of their adventures to modern audiences.

Her analysis of the account, which was first published in 1623 in Málaga, Spain, was finished with the support of a faculty fellowship. It addresses the text from two perspectives: the literal and the allegorical. As a travel narrative, it details the ups and downs of seafaring in the 1600s. But Lehman, who left Boston University for Fordham in 2004, saw much more at work in the writing.

“On one level, it’s a pretty exciting adventure tale with disastrous consequences,” she said. “On another level, it’s allegorical. The author leads you to this reading of the text by saying that it’s a book for travelers who are navigating the sea of life, that they should dedicate themselves to God and the Virgin Mary to avoid the storms of life. It’s through that allegorical reading that criticism emerges of commerce and greed in the New World.”

This is important, said Lehman, since Spanish explorers at the time were bringing home what seems to us like huge troves of treasure. “However, because Spain was waging two or three wars simultaneously, it ended up in the red, and had to borrow money from Italy and other countries. So the treasure that came over from the New World slipped through the fingers of the Spanish crown and went directly to pay off Spanish creditors,” she said.

“Spain wasn’t becoming any richer; people were starting to starve; and disease was becoming rampant. All of that comes up in the literature. As I was doing research, it became clear that the author was not just telling this tale of true events, he was also criticizing the greed that was underlying the whole venture.”

As an example, Lehman, who fell in love with colonial Spanish culture during trips to Mexico, said the word “rats” jumped out at her while reading the original text.

“One chapter is all about an enormous infestation of rats when they’re out in the middle of the Atlantic—thousands of rats. The author goes on with these descriptions, of how the cook had to boil them and throw them overboard to kill them, and how the rats were eating all the food on board and the cats and chickens,” she said.

“If you’re doing an allegorical reading, you look at the rats and draw a parallel between them and the greed and sin that was pervasive on this voyage.”

The book is filled with action, which makes it fun to read, Lehman said, and now it’s widely available and full of annotations that help readers understand archaic nautical terms and writing that—like Shakespearian English—is different than today’s vernacular.

“It hadn’t been edited since 1623, and so I wanted to make a version that would be accessible outside of a rare book library,” she said.

The success of that book has led Lehman to her next project, tentatively titled Sinful Business: New World Commerce as Religious Transgression in Spanish Colonial Literature. That book continues her focus on the interplay between political/economic and socio-ethical perspectives in the literature of the 17th century, but also encompasses the 16th and 18th centuries.

Tratado verdadero was not published in a vacuum, and in Sinful Business, Lehman conducted a comparative study of some canonical texts that reveals colonial intellectuals’ preoccupation with the moral decay of the Empire.

Starting with an introduction to greed, the book then considers early colonial figures such as Álvar Núñez Cabeza de Vaca, Hernán Cortés, Bernal Díaz del Castillo and Bartolomé de las Casas. Through their writings, she said, one can see how a negative portrayal of commerce began to develop in colonial literature. This censure continues and evolves over three centuries, as Lehman demonstrates by analyzing works by later colonial authors such as Carlos de Sigüenza y Góngora and Juan del Valle Caviedes. She continues through an examination of Spanish Golden Age writers, including Miguel de Cervantes, Francisco de Quevedo, and Lope de Vega.

“When I started researching greed by reading works in sociology and psychology, I came across Carl Jung’s theory of archetypes. Jung said the number of archetypes is limitless. I think there’s a merchant archetype and that it’s pretty easy to trace this greedy merchant figure through literature and folklore from around the world,” she said.

“As I worked on applying that in each text I was reading, new interpretations emerged that I wasn’t expecting. There was a sense of discovery in the literature, specifically because I had read psychology and sociology. That is why interdisciplinarity is really important to informing one’s perspective.”

In addition to Sinful Business, Lehman said she hopes to work on more critical editions like Tratado verdadero. She believes in the importance of textual criticism to making otherwise inaccessible texts available to scholars of colonial studies, as well as to undergraduate students.

“Some of these books might be useful for Latin American studies, or even in other departments, because of their interdisciplinarity,” she said.