skip to main content
Return to Fordham University
You are at:Home»Inside Fordham»Faculty Reads»Professor’s Research: Not Driving Can Drive Elders to Despair

“When I began in the late 1970s, there was comparatively little research on the elderly, so you could really sink your teeth into the field,” said Horowitz, the Graduate School of Social Service’s (GSS) new Nicholas J. Lagenfeld, S.J., Chair in Social Research. 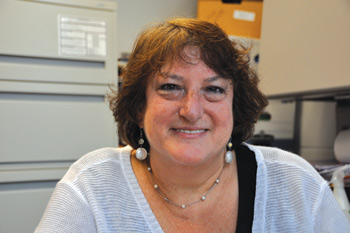 Amy Horowitz, Ph.D., has been principal investigator on roughly $9 million in grant-funded studies on the psychosocial effects of aging and sensory loss.
Photo by Janet Sassi

Since then, Horowitz has contributed a generous amount of research to the growing field of gerontology. She has acted as principal investigator on roughly $9 million in grant-funded studies on the sociological effects of aging, sensory loss and mental health.

It is no secret that aging can lead to myriad mental and physical impairments, from mobility issues to dementia. Horowitz’s research has largely focused on age-related macular degeneration, which leads to varying degrees of vision loss in the elderly. One of her earlier studies revealed that vision-impaired elders show rates of depression as high as people who are acutely medically ill.

“Losing vision engenders a much different reaction than other types of physical disabilities,” Horowitz said. “Because of the meanings that people attach to vision, the losing process becomes even more emotional.”

That 1998-2004 study, funded by the National Institutes of Health: National Eye Institute, followed approximately 500 vision-impaired elders to gauge what led to such depression.
“The two things that really distressed older adults about vision disability was, first, their inability to read—whether it was for pleasure or a menu or a hymnal at a religious service,” Horowitz said. “The second issue was not being able to drive.”

It is estimated by the National Transportation Safety Board that, within 15 years, 20 percent of licensed drivers in the United States will be 65 or older. That statistic, coupled with Horowitz’s earlier work, has inspired her latest study on the subject: “Driving Transitions and Mental Health in Disabled Elders.”

The study is examining how elders transition from drivers to ex-drivers, what factors contribute to depression after they have given up their car keys, and possible treatment options. Funded by the National Institute on Aging, the study has enlisted 360 older drivers (average age mid-70s) and approximately 200 of their family members and friends. It is a six-year study, with in-person interviews and one- and two-year follow-ups.

“The United States is a car society,” Horowitz said. “Driving has a great deal of emotional meaning, and the loss of driving isn’t just a pragmatic issue of ‘I can’t go from Point A to Point B.’ It’s also, ‘How do I get there when I want to get there, knowing that I can take care of myself?’ For some older adults, giving up a car is seen as the first step in a downward spiral of dependency.”

In fact, because older adults want to drive as long as possible, Horowitz said, they begin engaging in “self-regulatory” behaviors prior to losing their abilities. They will, for example, stop driving at night, stay off the highways and limit driving to within a certain radius of their homes.

Study participants who can no longer drive often express depression and helplessness in palpable terms; one ex-driver describes feeling “as if I don’t belong to the world” while another “wish(es) life would end.”

Eventually, data from the study should help build an empirical database that helps facilitate communication between elders and their family members on this very charged issue. It could also facilitate the design of timely interventions that address both public safety issues and the elders’ mental health, said Horowitz.

“We are beginning to see some findings showing it doesn’t matter to elders if an alternate transportation program is available,” Horowitz said. “Having such a program to transition into does not necessarily mediate the mental health consequences that occur for those who give up driving.”

As the Baby Boom generation ages, and as elder Americans continue to live longer, the need for geriatric research and geriatric practitioners will increase.

“It is still a struggle to get people across professions interested in working with older adults,” Horowitz said. “There is stereotyping, and most social work students enter the program wanting to work with children and families.

“But older adults can be a major societal resource to draw upon. They can volunteer, have second careers, and they can contribute much with their (life) expertise. We have to get used to thinking in that way,” she said.