skip to main content
Return to Fordham University
You are at:Home»Faculty Profiles»Professor’s Research Illuminated by the Challenge of Citizenship 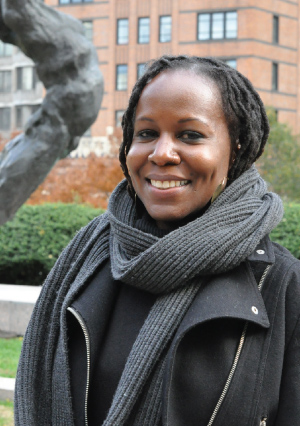 In her research, Aimee Cox asks, what does it really mean to be a successful American today?
Photo by Patrick Verel

It wasn’t enough for Aimee Cox, Ph.D., to volunteer at a homeless shelter in Detroit, where she took notes for her research on how teenage girls there were coping with a broken system.

Cox, an assistant professor African and African American studies, ended up becoming the shelter’s director while she was still working on her doctorate at the University of Michigan.

Her shelter experiences are now documented in Shapeshifters: Black Girls and the Choreography of Citizenship, to be published by Duke University Press.

When Cox started volunteering at the shelter, she had no previous director-level experience. But she was excited at the prospect of getting more deeply involved, and the center had been without a director for three years.

Once she took over, her perspective changed radically.

“It was one thing to be sitting in the back of the room as an observer and thinking ‘Oh my god, they need more funding,’” she said. “But [suddenly]I’m manning a staff of 15. I’m trying to rewrite grants that haven’t been resubmitted in five years, trying to get funding, and I’m creating new rules and regulations.”

Cox’s book deals with how homeless black teenage girls in Detroit were able, in arguably the bleakest setting in the country, to shift the terms of what it means to be an American today. They did so in an environment that was rife with racially charged “politics of respectability,” which includes the idea that if poor minorities dress and speak better, their lot will improve.

“At 7:30 a.m. the shelter doors basically lock you out for the day, and you have to be looking for work, or else go to a library,” said Cox. “But there are no jobs!”

What Cox found was that the girls would visit malls, apply for jobs and return with forms filled out by chains, like Cinnabon, proving they’d put in an application for jobs they weren’t likely going to get.

“The politics of respectability concept was a way for the shelter staff to feel better about the fact that nothing was really working, in terms of the job searches,” she said. “They could say, ‘The reason you’re not getting a job is because you should have on pantyhose,’ or ‘You should speak better English,’ or ‘You shouldn’t have these fingernails that are out to here.’”

A teenager named Janice, a shelter resident whose grandmother moved to Detroit just as the city’s economy was beginning to crumble, is a major focus of Cox’s book. Janice’s aunts, grandmother, and mother all struggle to make a living in the new service-oriented economy, sometimes working as many as three or four jobs just to stay above water.

And while all people experience struggles, Cox said the young women in her book define “The Struggle” as something that is particular to being a black person in America. It’s “struggling through,” which is the idea that if you just keep your head up and keep working hard, you’ll get to the other side. But Janice’s family, like many families in the system, is stuck.

“Struggling is working hard with no reward. You never have enough money, your physical and emotional health is always in question, and there’s no joy in your life,” said Cox. “That’s how these teenagers see their mothers: resilient, but working towards what?”

What Cox found is that Janice and her cousins have decided that their elders are getting nowhere, even though they’re doing all the “right things.”

“So Janice and her cousins are saying this is not what life is supposed to be like,” Cox said. “It’s really using the story line of the older women in their families to define a different trajectory.”

Cox is interested in looking at how people in this country overcome obstacles in order to achieve success.

“A lot of people write about poor people and black people, and talk about social mobility, and the questions are typically, ‘How do people become successful and how do people climb that ladder?’” she said.

“The question that I’m trying to ask in my work is, do we need to think about pulling the ladder up? What ladder are we talking about climbing? I’m not just interested in looking at how one gets to the top. I want to look at the ladder itself.”