skip to main content
Return to Fordham University
You are at:Home»Inside Fordham»Professor’s Research Bridges the Worlds of Physics and Biomedicine 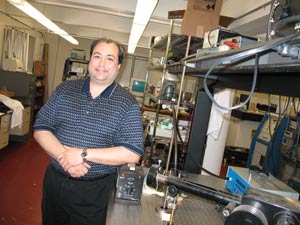 Had Martin Sanzari, Ph.D., begun his academic career even just a dozen years earlier, he likely would not have encountered such a knotty problem given the siloed worlds of physics and medicine. But by the late 1990s, the great romance between biomedical research and physics, particularly that corner of the field focused on light and lasers, was well on the way to full-blown marriage.

So when Sanzari, an assistant professor of physics at Fordham College at Rose Hill, was appointed a visiting scientist at the Laboratory for Soft Tissue Research at New York City’s Hospital for Special Surgery, he was looking for a problem in medicine that only a physicist could solve. He found one when he asked a seemingly innocuous question of the doctors and bioengineers who were experimenting with collagen and ultraviolet light to repair damaged tissue: How do you know when a collagen molecule has denatured?

It was an important question. To denature a molecule is to unravel its helical structure, which equates to destroying it—not so great if you happen to be a living thing. But how do you know you’ve reached that point if, say, you have just zapped the molecule in a person’s body with ultraviolet light?

The answer at the time was, well, not very easily.

That problem would set Sanzari, an expert in lasers with a doctorate in physics and two engineering degrees, on a decade-long journey to fully understand the effect that ultraviolet light has on the inner workings of collagen molecules.

“Ultraviolet light and lasers, these aren’t medicine, they’re physics,” Sanzari said. “Surgeons have begun to use ultraviolet light to treat tissue and so the question on my mind was, ‘Okay, well, maybe [ultraviolet light]is helpful, but maybe it’s hurting because ultraviolet light has very high energy. We know, for instance, that it’s not good when you stand in the sun. So that was the question: Are we doing some kind of damage that we don’t know about? That’s why I wanted to know how much radiative energy was actually needed to unravel the molecule.”

The only way to find out at the time involved a laborious process of exposing a molecule to ultraviolet light at a certain frequency and intensity and sending it off to a lab for chemical analysis and then repeating the process at a different setting until the lab sent back word that denaturation had occurred. “I’d have to measure thousands of samples,” he said, “and maybe by the time I retired I’d get an answer.”

Working in his lab at Fordham and drawing on his background as an engineer—he spent 10 years as a researcher and program manager at a defense contractor prior to joining the Fordham faculty—he built a laser apparatus that can determine precisely under what conditions ultraviolet light denatures collagen molecules. And it can do it in real time, obviating the need to send out samples.

Sanzari has used the apparatus to do countless experiments and has amassed piles of data on collagen molecules. That’s a good thing as it isn’t too much to say that collagen is the glue that keeps us together. Strip out collagen from your body and you’d probably dissolve into a gooey glob of a mess.

Sanzari’s pioneering research has helped map new terrain in the safe use of ultraviolet light for medical purposes and furthered an understanding of its effects on collagen. In the process, he’s also discovered a curious thing. He and his undergraduate research assistants have noticed that collagen molecules exposed to lower levels of ultraviolet light (not enough to destroy them) can be denatured by heating them at lower temperatures.

This is a worrisome thing.

Suppose a surgeon operates on you and uses a procedure involving ultraviolet light on your tissues. The doctor then sutures you back up and you recover, but now your collagen molecules exposed to ultraviolet light are so beaten up that they will denature below normal body temperature. Trouble.

“You are walking around and inside you’re falling apart,” Sanzari said.

Sanzari isn’t quite sure about the physics of the phenomenon. It’s too early in his research for any definitive answers. He and two research assistants spent the past year collecting data on the phenomenon and Sanzari said there is more work to be done. He wants to not only find what produces the phenomenon, but which ultraviolet wavelengths cause the molecules to weaken. Ultimately, what he wants to develop is a theoretical justification for the phenomenon.

That is the kind of rigor and caution, Sanzari said, that a physicist and engineer brings to a perplexing problem. It has served him well throughout his career and he is convinced that it will foster increased innovation in medicine as the field increasingly taps the physics of light for diagnosis and treatment.

“It’s only when you understand something completely can you use it for your benefit,” Sanzari said. “I like problems and like solving them from an engineer’s and inventor’s perspective,” Sanzari said. “The way I think is a combination of physics and engineering because I grew up in both worlds. I enjoy that because it allows me to move within a much bigger realm: I can do scientific experiments, I can invent something, or I can solve problems with an engineering-type approach.