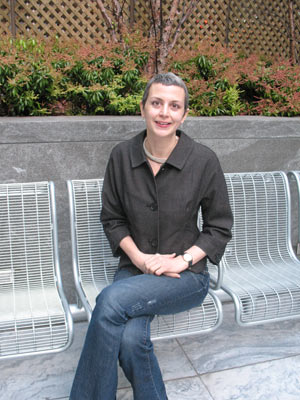 Jeanne Flavin, Ph.D, will investigate the relationship between women and the South African criminal justice system on a Fulbright fellowship.
Photo by Janet Sassi

South Africa is infamous for its apartheid system of discrimination, which existed from the 1940s to the 1990s. Today, however, the issue of violent crime has taken center stage.

In fact, a recent United Nations study listed South Africa among nations with the highest rates of assault, rape and murder.

Jeanne Flavin, Ph.D., associate professor of sociology and anthropology, will travel to the African cape nation this month on a Fulbright fellowship to research the involvement of South African women in crime and the criminal justice system.

The research, Flavin said, will help provide an understanding of apartheid’s lingering impact on the social, political and economic forces in women’s lives, and offer a glimpse at what led women to commit their offenses.

“You constantly hear about how much crime there is in South Africa,” said Flavin, who will spend six months with the University of Cape Town’s Gender, Health and Justice Research Unit. “Women are being caught up in the criminal justice system there, and I suspect many of these women have also been victims of violence. I want to learn more about the relationship between women, crime, family and kinship networks.”

When studies emerged in the 1970s on women and crime in industrialized nations, the studies often made assumptions based on what was known about men and crime. That was a mistake, she said, because women are so differently situated in society.

Since that time, Flavin said, there has been a fair amount of research on women and crime in the United States, Canada and Europe, but not so much in African countries. But she said it is important to study South Africa on its own terms.

“We should not assume that findings in the United States are applicable to other countries, where the nature of family, kinship ties and households are different,” she said.

Some information about incarcerated women in South Africa is already known:

• Nearly all of them are black or mixed-race women of reproductive age.

• Eighty-four percent of them are mothers.

• The children of the vast majority of incarcerated mothers are in the care of family or friends.

• More than half of these incarcerated women report having no interaction with their children, or having lost contact with them.

• Some two-thirds of the women are in prison more than 60 miles from their home towns.

In researching their pathways to crime, said Flavin, she plans to measure the importance of family ties in their commission of a crime.

The responsibilities of motherhood, Flavin said, can work both ways on a woman’s behavior. They can provide a stake in conformity and be a positive motivator, a buffer to committing a crime. Or they can push a woman without resources into crime, as she struggles to feed, house and clothe children.

In addition, the lingering effects of apartheid still may be fragmenting families, especially when a woman is separated from her children due to illness or the need to migrate to find work. These events, as well as the actual separation, may be key turning points that influence a woman to engage in crime.

“We need a better understanding of how these processes are influencing women’s criminality,” said Flavin, who will collect data by interviewing 50 women with experience in the criminal justice system.

“This information is needed to [help]prevent women’s offending in South Africa and to develop sentencing and prison policies that reduce the impact of crime on homes, communities and future generations,” Flavin said. She also hopes the study will broaden the scope of criminal research to include Africa, thus helping to correct the American-Anglo bias that may exist within the discipline.

Flavin’s Fulbright project stems from her longstanding interest in how the U.S. criminal justice system responds to women who commit crimes.

For instance, Flavin has found that women are often punished not only for their crimes, but also for violating dominant ideas about how a woman or a mother should act. According to Flavin, we cannot understand women’s involvement in the criminal justice system without also addressing women’s position in society.

Similarly, she observes, any measures that elevate women’s social and economic status positively affects other areas as well, including public health and the well-being of children, families, and communities.

At Fordham, Flavin is the sole faculty member to receive a Fulbright during the 2008-2009 academic year. Although she said that she always wanted to apply, she was motivated to do so by her students.

“I would encourage them to apply for prestigious awards, fully aware that I had not extended myself in that direction,” she said. “My students led by example.”

Flavin said her experience with the Fulbright program, administered by the Council for International Exchange of Scholars, has been positive and supportive. She encourages members of the Fordham faculty to apply.

“Anything that takes us out of our ivory towers and from behind our computers will make us better scholars and better teachers,” Flavin said. “I am looking forward to bringing new insights back to the classroom.”

In her spare time, Flavin is board chairperson and volunteer at National Advocates for Pregnant Women, an organization that advocates for the human rights and dignity of all women, focusing on pregnant and parenting women and their families. Flavin is also the author of Our Bodies, Our Crimes: The Policing of Women’s Reproduction in America (NYU Press, 2009).