Lloyd Rogler, Ph.D., Albert Schweitzer Professor Emeritus in the Humanities, is no stranger to the world of publishing. During more than 50 years as an academic and medical researcher, he has authored eight books. 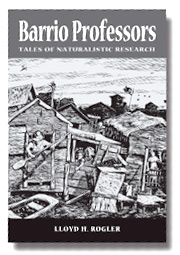 Though Rogler is reticent about his body of work, he admits to feeling a bit of pride for his most recent publication, Barrio Professors: Tales of Naturalistic Research (Left Coast Press, 2008).

The book, his first work of fiction, was celebrated on Dec. 5 by his former colleagues in the Latin American and Latino Studies Institute with a party and book signing at Duane Hall.

“After years and years of research, I felt that I had things to express in fiction,” said Rogler, 78, the former director of Fordham’s Hispanic Research Center. “I’m a sociologist, but my father instilled in me a love of reading literature, and I always wanted to become an author of fiction. I thought it would be the greatest thing ever.”

Rogler—once designated a “superstar” in medical research by health economists from Columbia University due to his high attainment of research grants—didn’t just sit in front of a computer and bang out a book. He enrolled in the University of Iowa’s renowned Writers’ Workshop for five consecutive summers.

Barrio Professors draws on Rogler’s experiences as a participant observer while researching mental illness in the slums of Puerto Rico and the inner city of New Haven, Conn. Rogler’s descriptions of the neighborhoods and its residents are quite vivid.

The informants—or “barrio professors”—whom he encountered during his research were a great source of information during his career, he said.

“They are composites of people I have known,” Rogler said of characters in his book who refuse to surrender to despair and poverty. “I’m glad I’m able to tell their stories.”