skip to main content
Return to Fordham University
You are at:Home»Inside Fordham»Professor Works to Design the Ultimate Senior Center 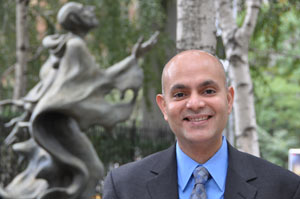 Manoj Pardasani says senior centers should be designed so that elders can give back to the community in meaningful ways.
Photo by Janet Sassi

At a certain point in his life, Manoj Pardasani realized that he really liked the company of seniors.

At that time, Pardasani was responsible for running a current events discussion group for elders in their 70s and 80s at Bronx House Emmanuel Senior Center. One day, he announced that a new member was about to join. To his shock, someone in the group asked whether the new person was “old,” because they didn’t want anybody “old” in their group.

“Here was a 75-year-old telling a 23-year-old not to bring anybody old into a senior center group; it was most bizarre!” recalled Pardasani, an associate professor of social work. “My first thought was, ‘Doesn’t she consider herself old?’”

Pardasani soon came to understand that elders in the center, many of whom were Holocaust survivors or first-generation immigrants, defined “old” in a way that the young social worker had never considered.

“Old,” to many of them, meant they were no longer active or vibrant members of society.

“The strength, dignity, vitality and grace with which these older adults were living their lives moved me tremendously, and I thought, ‘If only I could make a difference,’” said Pardasani, who was born and raised in Bombay. “We as a society may think that life ends at 70, but for many of our elders, life goes on into their 90s and they have to reinvent themselves and their identities as people. That really was an eye-opening experience for me.”

His interest piqued, Pardasani began asking the center’s staff about a career in senior center administration. They all told him: get a master’s degree in social work.

Pardasani did. He earned his master’s from Yeshiva University’s Wurzweiler School of Social Work and became Bronx House Emmanuel Senior Center’s director while earning his doctorate.

Pardasani’s dissertation evaluated the impact of senior center participation and programming on the elderly and received the 2004 Outstanding Research Award by the National Council on Aging. It was a significant achievement for an immigrant who was serving others while in high school, tutoring children from the Bombay slums.

Today, Pardasani teaches in the Graduate School of Social Service (GSS). His 2007 study for the National Institute of Senior Centers (NISC), where he is a board member, looked at several hundred centers across the nation to identify emerging innovative models of senior centers. The study identified eight for presentation. Two models include:

• The Community Center Model. This model, based in part on the Manzano Mesa Multi-Generational Center in Albuquerque, N.M., is designed around the idea that older adults should not be segregated from the community. A single community center would house programs for children, teenagers, families and seniors, and would have at its core a health and fitness center.

Community center models, he said, are similar to YMCAs that offer so much programming that they often publish their own magazines listing programs in a range of areas—health, recreational, educational, cultural and social service. These centers also have extended hours and league sports activities, and appeal to “boomer” seniors who might not go to a center restricted to seniors.

“Lifelong learning centers still have traditional programs, social services and meals, but their focus is on partnerships with universities and colleges,” Pardasani said. “These seniors go on archaeological trips to Egypt, ecological trips to China and more. The centers attract this tremendous group of seniors, even the young retiring baby boomers who crave activities well beyond a game of bridge or cards.”

The ongoing shift in our senior cohort, said Pardasani, requires society to look at senior centers as more than a place for a free meal.

“Seniors don’t want to be just the recipients of services,” he explained. “They want to give back in a meaningful way. We are talking about people who have had rich lives and careers and want to share something of their knowledge, wisdom and expertise.”

To those ends, Pardasani said, all senior center models can tap seniors as volunteers to save money while building their clientele’s self-worth.

The New York City Council of Senior Centers and Services (CSCS) commissioned Pardasani to do a three-pronged study of the city’s 400-plus senior centers in an effort to design a “charter” senior center. He has distributed a written survey in six languages to accommodate the diverse cultures within New York. He is also holding on-site focus groups to gather information firsthand from those who attend city centers.

Taking a closer look at senior centers, Pardasani noted, is important because the participant base has been eroding over the past decade. The question on the horizon is: Will baby boomers be motivated to replace the generations who are aging out?

“There are not many people who do research on senior centers,” he said. “But if the centers want to advocate for more resources and funding, they need to be able to demonstrate what they do and how they do it. Currently, they are working from anecdotes, but that doesn’t cut it with funders anymore.

“They need the data,” said Pardasani, who will finish his report in December.