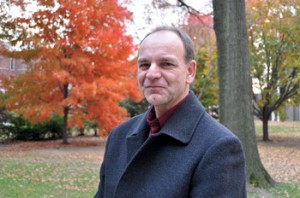 Robert Brancatelli, Ph.D., wants to train people to serve the church as it goes through a period of staff downsizing and parish consolidation.
Photo by Gina Vergel

Timing can be everything, especially when it comes to research.

Robert Brancatelli, Ph.D., was working at the National Catholic Educational Association (NCEA) in Virginia when he began searching for ways for the church to be more creative.

“It needs to become more active in people’s lives, but I wasn’t interested in the same old way of doing things,” said Brancatelli, who has written on Hispanic popular religion, liturgical catechesis and psychological transformation.

He felt the focus needed to be on people who work for the church.

“When I say ‘people,’ I don’t necessarily mean clergy or academics,” he said. “A lot of people working in parishes, for instance, are interested in having meaning and a life that adds up to something. They want to have a sense of mission.

“All of that was percolating in my mind when I came here to Fordham and had some conversations.”

Last September, while attending a new-faculty orientation session on the Rose Hill campus, Brancatelli found inspiration for a new course thanks to another fresh Fordham employee.

David Gautschi, Ph.D., dean of the Graduate School of Business Administration (GBA), announced plans to convene a group of about 35 people from around the world—businesspeople, academicians, deans of business schools and think-tank scholars—to tackle a single question:

“When I heard that, I thought, ‘There’s my guy. There’s my answer,’” said Brancatelli, who is now a member of that group—the Fordham University Graduate School of Business Consortium.

“I was looking for someone who could step back and take a broader perspective on things, because for me to make the church and ministry relevant, it’s got to speak the language that people understand,” he said.

This semester, Brancatelli is teaching that new course, “Entrepreneurial Discipleship,” with Gautschi. It is the first collaboration between GBA and GRE.

It was important for the course to approach the subject from a business perspective because, in the United States, the Catholic Church employs thousands of full- and part-time employees and has an operating budget of approximately $100 billion, Brancatelli said.

Yet the church is facing a decade-long crisis that was only exacerbated by the global recession that began in September 2008.

“You have to go back to the sex abuse scandal and the catastrophic effect it had on the church—not to mention our moral standing in the eyes of the world,” Brancatelli said. “A lot of money could have been generated and gone into ministry, but it didn’t.”

Instead, that money was used to pay abuse claims, which only exacerbated the problem of falling revenue and limited resources.

“And, of course, we are now dealing with a global recession. How has the church responded? By terminating services, cutting budgets, laying off employees, downsizing staff, consolidating parishes and schools and asking those who are left to do even more with less,” Brancatelli said.

But he is not disheartened.

“I believe this combination of crises has given us a graced opportunity to restructure ourselves as a church to be more effective in evangelization and catechesis while at the same time creating jobs—work—in the process.”

“Entrepreneurial Discipleship” is meant to help people respond to the changing environment of the church and to focus not on specific jobs, some of which may not be there in five years, but on innovation and the identification of new markets, Brancatelli said.

“Whether it’s youth ministry or religious education, we want to train people to think independently so they can go to the diocese and say, ‘I can do this and this at this level,’” he said. “They need to create their own market because the existing markets in the church are changing. The buzzword in Silicon Valley right now is ‘pivot.’ They need to look at their skills that way.”

This idea fosters a different approach to the theology of ministry, Brancatelli said.

“It’s not just repackaging yourself, so you can have a job, it’s rethinking what it means to be a church,” he said.

“Most theologies of ministry come out of an understanding of our universal baptism. We’re called to build up the church. I’m more interested in developing a theology based on relation,” he said. “If you’re called into a situation in which you’re dealing with someone who is not a Christian, you have to be able to understand you’re in a relationship with an ‘other.’ I believe the best foundational understanding for that can be found in the Trinity.”

Moving forward, parishes and dioceses will have to organize themselves the way that businesses do, Brancatelli said, “perhaps even partner with businesses the way some nonprofits do—not just to streamline reporting, budgeting and decision-making but to reach people more effectively.”

Some may think this adaptation of a business model for ministry resembles a sales model. But Brancatelli doesn’t think that is a bad comparison.

“We can develop a theology of ministry based on the call to discipleship that is not unlike Jesuit spirituality, the basis of which is to be ‘contemplatives in action,’” he said. “This may be the future of discipleship and ministry as well as the next phase of the ecclesia, of the church, as it becomes truly universal.”