If the global community is going to get serious about reducing climate change, the United States needs to get on board, said Paolo Galizzi, Ph.D., associate professor of law. 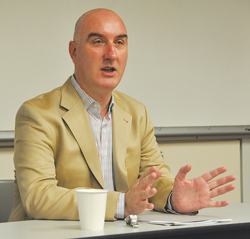 Paolo Galizzi, Ph.D., says that science proving the existence of climate change is stronger now than ever.
Photo by Patrick Verel

But for that to happen, the political alignment needs to change radically, he said on Oct. 13 in a lecture on the Lincoln Center campus.

Galizzi, the director of the Sustainable Development Legal Initiative at Fordham, appeared as part of a lecture series sponsored by the Institute of International Humanitarian Affairs.

In his talk, Galizzi detailed the origins of the international community’s response to climate change—from the first framework treaty in 1992, which the United States signed, to the 1997 Kyoto Protocol, which it did not.

“The objective is not to stop climate change, because that is not feasible. But what you can do is reduce its impact so that changes occur in a way that is manageable,” he said.

Three principles are at the core of the international approach to climate change:

The first principle indicates that all countries have an obligation to change, but not every nation bears the same amount of responsibility or has the same capability to respond.

“Consider Burundi, a very poor land-locked country in Eastern Africa. How can you ask them to help solve this problem?” he said.

“This principle is about fairness, and who pays for problems that are global problems. But as you’ve probably seen these days, the idea of what is fair and who pays for what is not always easy to define.”

The second principle, precaution, draws the most opposition in the United States because the premise is that even if you are only 90 percent certain that human behavior is causing climate change, you should act on it.

“Nobody can tell you with certainty that the sea level will rise by one meter in New York City on Dec. 1, 2025,” Galizzi said. “What people can tell you is that it is very likely going to happen at a certain stage.”

The third principle, which focuses on sustainable development, divides poor and rich countries because the former insist that they should not be forced to slow their attempts at creating better lives for their citizens.

“How can you tell people who live on less than a dollar a day, who don’t have energy, access to water or transportation, that they do not have the right to aspire to what we take for granted?” Galizzi asked.

Sorting out differences among countries is essential because global warming will affect everyone on the planet. Hurricanes, typhoons, floods and other forms of severe weather that are expected to increase will not differentiate between nations that cut back on carbon emissions and those that did not.

But nothing will improve unless legislators in the United States agree that climate change is, indeed, happening. Although virtually no serious scientist will deny that the Earth’s climate is changing, Galizzi said that the number of skeptics is increasing.

“If you go to 100 doctors and 98 say that you have a disease, and two tell you that this particular disease doesn’t exist, who are you going to trust? The 98, or the two?” he asked.