skip to main content
Return to Fordham University
You are at:Home»Inside Fordham»Professor Uncovers the Crusading Stories of Medieval Families 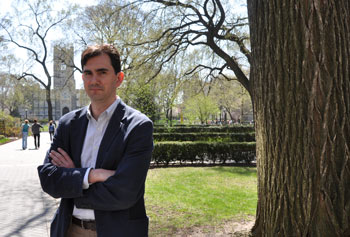 Many academics have found their scholarly passions thanks to a professor’s influence. The same holds true for Nicholas Paul, Ph.D, assistant professor of history.

Only he set out to prove his professor wrong.

“One of the great observations he made was that families played a particularly important part in dictating whether someone would go on a Crusade,” Paul said. “But he also said that, unfortunately, we don’t know how to explore this any further; that it might be impossible to access family memories.

“I thought, ‘Is this true?’ Are there any sources we can use to try to talk about what it means to be a member of a particular family? My answer to that is yes, there are. We have their family histories.”

Paul received a Fordham faculty fellowship for the year 2009-2010, and will be a member of the School of Historical Studies at the Institute of Advanced Study in Princeton next year. He traveled to Spain and France last summer with the help of a faculty research grant to hunt for family histories. There, he found narratives in the archives of Barcelona, Limoges, Anjou and Paris, and examined the tombs of crusaders.

“I’d look at the kind of architecture or the kind of artistic motifs worked into the churches that the families supported,” he said. “These are places where their stories and aspects of their identities are embedded.”

Paul is interested in learning how the crusading movement influenced the development of European culture. His research is not limited to those who actually fought in the Crusades.

“I’m particularly interested in how crusading traditions worked within noble families,” he said. “Many families—from Austria in the east to Spain in the west—became involved in crusading movements over multiple generations. Crusading became an aspect of nobility. In many cases, it was expected of people.”

Certain noble dynasties, Paul said, took their crusading responsibilities very seriously. They would send generation after generation into the religious wars. Paul intends to find out what the significance of this was, and how traditions arose within these families.

“For me, crusading is, in some ways, interchangeable with a lot of different things, like supporting a particular monastery or a particular political faction,” Paul said. “Crusading was clearly a tradition. I look at it and ask, ‘What is a tradition? What makes a family do something repeatedly over time?’”

The answers may lie with the aforementioned monuments or in commemorative texts chronicling generations of family history, Paul said.

“It just so happens that the genre of family historical writing starts right around the time of the Crusades,” he said. “They tell us, essentially, how they imagine what it means to go on a Crusade or what it means to have a relative go. For me, it’s not so much what they are doing when they go on a Crusade, but how they tell stories about it within the family environment.”

Through these family histories, Paul discovered that some families imagine their crusading tradition to go back several generations before what is considered to be the actual beginning of the Crusades.

“They imagine these epic legendary ancestors who went on crusade in the golden days of the past, a fictional legendary past,” Paul said. “Some histories tell quite spectacular legends about what happened to their ancestors when they were in the East.

“One of the more fantastic legends that you may see is a relative going to the East and rescuing lions, who then become his friends and fight with him. There’s an element of this that has to do with the exoticism of the East that they are imagining—this place where there are wild animals that they would otherwise never come across. They weave that story into the tradition of the family; it becomes part of who they are.”

The stories were told as entertainment, Paul said, but also as instruction to the young. This sparks another research angle.

“I’m interested in literacy and how a family in the 11th and 12th centuries might pass on these stories,” he said. “Do they know them from sources that are written down? We have what a family chaplain or a local monk writes down from the family history. Is the monk’s version meant to be more instructive and more educational than the story they might tell around the fire?”

As with many academics at Fordham, Paul will continue to delve into his research, which means he will continue to read the stories of crusading families. It’s work that just might tell us something about ourselves.

“We are who we are, members of a particular family or group, based on what we hear, what the people around us tell us and what we tell each other,” he said.

CORRECTION: A mini-profile of Nicholas Paul, Ph.D., in the April 14 issue of Inside Fordhamcontained several inaccuracies that occurred in the editing process.