skip to main content
Return to Fordham University
You are at:Home»Faculty Profiles»Professor Tracks Youth Activism in the Post-Communist Region

On Christmas day 1991, in a small industrial town in Ukraine, Olena Nikolayenko watched an announcement
on television that Mikhail Gorbachev, the leader of the Soviet Union, had resigned. 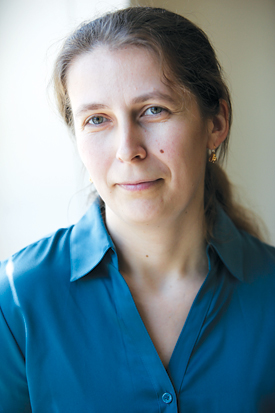 From that moment on, life changed for the teenager.

“Ukraine gained national independence in 1991, so I saw dramatic political and socioeconomic change in the country,” said Nikolayenko, Ph.D, assistant professor of political science. “We were no longer required to study the communist ideology. At school, we threw out Soviet-era history textbooks and began to learn forbidden episodes of Ukrainian history.”

Twenty years later, however, the change that most post-Soviet nations had hoped for still remains distant.

“When the Soviet Union fell apart, there was a lot of euphoria about the triumph of democracy in the post-communist region,” she said. “In fact, out of 15 former Soviet Republics, only three—Estonia, Latvia, and Lithuania—can be considered democratic right now, 20 years after the collapse.”

An expert in youth and politics, Nikolayenko specializes in how young people participate in politics in non-democracies. Her recent article, “Tactical Interactions Between Youth Movements and Incumbent Governments in Post-Communist States,” forthcoming inResearch in Social Movements, Conflicts and Change, examined a series of youth protests that permeated the region in the late 1990s and early 2000s.

“There has been a tide of nonviolent youth movements in the post-communist region… that emerged to demand political change against the incumbent rulers,” she said. “I wanted to examine why some youth movements are more successful than others in mobilizing citizens against these regimes.”

In 2000, Nikolayenko said, a group of Serbian students set the tone for this spate of youth activism with a movement known as Otpor, meaning “resistance.” The youth movement threw a New Year’s party in downtown Belgrade, attracting thousands in the capital city to usher in the new millennium with a free concert and a night of festivities.

But at midnight, Otpor halted the celebration. Images of citizens and soldiers who had been killed in recent conflicts flashed across a projection screen. Serbians had nothing to celebrate, the activists said. Instead, they ought to return home and think about how to change the situation.

In the months that followed, Otpor created a “culture of resistance.” Bearing the symbol of a clenched fist, the group organized peaceful protests in the form of media campaigns, graffiti, and political stickers, urging Serbians to “live resistance” daily.

Youth movements throughout the region followed Otpor’s example, said Nikolayenko. In 2001, the Belarusian movement Zubr (“Bison”) called for the removal of the incumbent president. Kmara (“Enough”) was launched in the Republic of Georgia prior to the 2003 parliamentary elections. A year later, Pora (“It’s Time”) emerged in Ukraine, followed by Yeni Fiki (“New Thinking”), Maqam (“It’s Time”), and Yokh (“No”) in Azerbaijan.

What united these groups, Nikolayenko found, was a commitment to nonviolence and the use of youth-oriented activities such as rock concerts and street performances. Each was also successful in drawing young people to the polls.

“Obviously there are multiple factors at play when you try to explain the resignation of the incumbent president or the breakdown of a regime, and youth are just one of the players,” Nikolayenko said. Nevertheless, “this wave of youth mobilization against the non-democratic regimes occurred on an unprecedented scale.”

Nikolayenko has also studied how the current generation—the first to grow up without the firsthand experience of communism—form political attitudes. While a graduate student, she surveyed Russian and Ukrainian adolescents about their political opinions and whether they felt what she called “Soviet nostalgia,” that is, whether they thought the dissolution of the Soviet Union was a positive or negative event for their countries.

She found that the majority of Ukrainian adolescents viewed the Soviet Union negatively and endorsed its collapse. Alternatively, less than half of Russian adolescents viewed the collapse negatively. As she contends in her recent book, Citizens in the Making in Post-Soviet States(Routledge, 2011), this attitudinal difference comes in part from the differences in the two countries’ educational systems, particularly how history textbooks narrate the Soviet period, including Stalin’s reign, and World War II.

Up next for Nikolayenko is research on “the darker side of civil society.” This fall she will use a faculty fellowship to study a rise in hate crimes that have occurred in Russia. These crimes have largely been committed by young men, many of whom are members of skinhead groups, who have targeted Central Asian migrants seeking employment in Russia. To make matters worse, she said, the migrants lack legal protection both in the host society and home country.

The phenomenon points to the reality that many post-Soviet nations have a long road ahead.

“It’s naïve to assume that once communism collapsed, these countries would make a swift transition to democracy,” she said. “The post-Soviet region provides a laboratory for the study of authoritarianism in the post-Cold War period, because citizens in these countries still continue to suffer under repressive political regimes.”