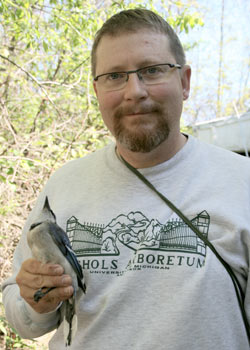 Birds have been migrating for millions of years, but it has only been in the last century or two that they have had to contend with urban centers of light and noise on their migration routes.

“It used to be dark in the world at night, but not anymore,” said Clark, who has studied bird species all over the globe. “Now, there are a lot of obstacles to migration—buildings, windmills, artificial lights, planes and noise.”

Most birds migrating at night produce species-specific birdcalls. The goal of Clark’s study was to measure the number of bird night flight calls at designated pairs of sites along the corridor—a more quiet and dark locale paired with a very urban, light and noisy site, both within a mile of each other.

Special microphone equipment was developed and deployed at three pairs of sites last year by Clark and his graduate students:

• a spot in Central Park and an East Harlem street;
• the Bronx Zoo and a rooftop on Belmont Avenue in the Little Italy section of the Bronx; and
• Scarsdale’s Greenburgh Nature Center and the Central Animal Hospital several blocks away on Highway 100.

“My prediction was that birds would avoid the light, noisy urban areas and go for the greenways instead,” Clark said.

But the birds, it turned out, appeared to be attracted to the light, noisy areas.

“Over seven nights, that’s a pretty significant difference,” said Clark, who is also working with the Cornell Lab of Ornithology to further test whether light and noise pollution has a greater impact on certain species.

This season, Clark and his graduate students are refining his research by adding a radar component to the same study sites during the spring and fall migration periods, to measure bird density. It may be possible, said Clark, that birds migrating near light and noise need to call more frequently because they are confused, lost, or drowned out by noise.

With radar imaging, the team will be able to correspond the number of birdcalls with the actual number of birds, creating cutting-edge data on how migrating birds make their way through urban areas.

“By combining these two data sets, which no one has ever done before, we will be able to paint a picture of the obstacles and opportunities that birds face from greenbelts versus buildings, as they migrate through our cities,” Clark said.

Migrating birds make up about 40 percent of the world’s total birds, but they account for a higher percentage in the northern hemispheres. As the world population increases, their wintering and breeding habitats are increasingly threatened, Clark said. Moreover, urban areas are growing louder at the rate of approximately one decibel per year, he added.

“As a species, humans are becoming louder and more nocturnal,” Clark said. “This does not bode well for migrating birds. The levels of stress hormones in birds rise when they are exposed to noise, and background chatter can also mask predators. Research has shown that birds in noisy areas experience lower reproductive success.”

Lights are a fatal attraction to birds, noted Clark, because birds can lose their way in the glare and run into buildings. Because some 5 million birds fly through New York City during the migration season, the city has instigated a voluntary program named Lights Out N.Y. During migration periods in the spring and fall, building owners are asked to turn their lights off from the 40th story and higher, from midnight until sunrise.

The Lights Out program, Clark said, has sound economics: it saves energy while reducing bird mortality from collisions by 80 percent. Clark hopes that his research will be adopted to promote further interest in Lights Out programs in other metropolitan areas.

There is another utilitarian side to Clark’s study, too. It was recently determined that the most likely cause for the crash landing of U.S. Airways Flight 1539 last year in the Hudson River was a flock of Canada geese.

“If you are trying to track birds from a military or an aviation perspective, a lot of the tracking techniques we are developing can be applied,” Clark said.

In the future, Clark plans to move from observational data-gathering to experimental data-gathering, to further test the effects of light and noise on bird behavior in the urban corridor.

“It’s important to protect and preserve these natural phenomena,” he said, “and to mitigate the activities causing these animals harm.”

Clark has had a lifelong love affair with birds. As a boy, he “plagiarized” Peterson’s and Golden’s field guides to write, illustrate and self-publish his own amateur bird book for friends and family.

Surprisingly, he earned undergraduate degrees in music education and philosophy of religion, a master’s degree in natural resource policy and a juris doctorate in environmental law.

But a live encounter with a Yellow-Eyed Penguin in New Zealand, while studying legal policies on endangered species, changed the trajectory of Clark’s career. “When I looked at the penguin, my childhood passion for biology was reawakened. I said to myself, ‘If this law thing doesn’t work out, I want to study penguins.’”

And study he did—from organic chemistry, to calculus, to a doctorate in biology followed by a research opportunity with Dee Boersma, Ph.D., a University of Washington conservation biologist known as the “Jane Goodall of penguins.” Today, Clark has logged many years of research on Magellanic Penguins in Argentina and has a particular expertise on their vocalizations.

“Birds bring me joy,” said Clark, who also teaches conservation law and policy classes at Fordham Law School, “and that’s enough reason to preserve them—so that our offspring can also experience these amazing creatures, some of which migrate 10,000 miles each way every year.”