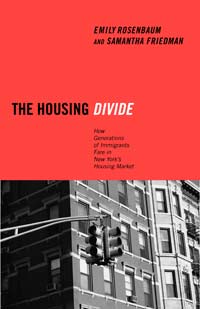 In all those novels and movies, the immigrant experience in America is the stuff of dreams. Whether you come to America on a plane, a boat, or slip under a fence, the pattern of assimilation remains the same as it was in the 19th century and early 20th—you and your U.S.-born children’s lives improve over generations.

Unless, according to Emily Rosenbaum, Ph.D., professor of sociology and anthropology, you are black.

Rosenbaum’s book, The Housing Divide: How Generations of Immigrants Fare in New York’s Housing Markets (New York University Press, 2006), analyzes data on upward mobility as it relates to housing of different racial and ethnic groups across three generations in New York City. What she and her co-author, Samantha Friedman, Ph.D., assistant professor of sociology at Northeastern University, found was that for white, Latino and Asian immigrants, housing improves or remains the same over generations. For black immigrants, however, it declines.

“When you walk down the street in New York, you see people from everywhere, and of every different look and skin color,” Rosenbaum said. “But in terms of the neighborhoods where we live, New York City is incredibly segregated. It is one of the few metropolitan areas that has maintained an extremely high level of segregation since the 1970s, where, nationally, segregation has moderately declined.”

In fact, Rosenbaum’s research puts the city’s “index of dissimilarity” at .84 compared to a national average of about .60. More than 8 out of 10 blacks or whites would have to move out of their segregated neighborhoods in order to achieve integration between the two groups. While the segregation of foreign-born blacks from whites is nearly as high, curiously foreign- and native-born blacks tend not to share the same neighborhoods.

What this pattern of housing means is that, on average, the black immigrants will experience the best housing, she said, with a worsening in conditions in future generations.

“If you have, say, an African or Caribbean accent, or some other way of demonstrating to the outside world that you are not native born, you get treated better—better job promotions, better housing,” Rosenbaum said. “You are more acceptable. You are considered to be a hard worker, and of higher social status than native-born blacks. However, once the rising first generation loses that marker of ethnicity such as an accent, and it just blends in, it’s rather grim.

Surprisingly, the highest incidences of housing segregation exist primarily in the Rust Belt—those hubs of manufacturing that experienced deep shifts in demographics as African-Americans migrated from the South during the 1940s and 1950s for better opportunities.

Once a neighborhood reaches a 5 percent black population, Rosenbaum said, it begins to experience white flight. The levels of white flight are lower in Western cities because the black population is less than 5 percent in many urban areas. In the South, Rosenbaum said that old patterns of employment still affect neighborhoods, which are more integrated than in the North.

“In terms of residence,” she said, “slaves would live close by to the whites they worked for, so they were actually sharing neighborhoods, if not lives,” she said.

And the suburbs don’t integrate much better than urban areas. As blacks move into inner-ring suburbs, white flight pushes other populations further out, she said.

“Housing really is a key indicator of socioeconomic status,” she said. “The consequences of homeownership are serious because home equity makes a major contribution to any given household’s wealth portfolio. It can be leveraged to provide things that contribute to your future generations, such as a college education.”

Rosenbaum’s research also shows that, among Latino immigrants, non-black Hispanics fare better than black Latinos. “This is the legacy of racial discrimination and stratification,” Rosenbaum said.

Earlier this year, Rosenbaum and co-author Friedman were guests on a radio talk show in which people called in to comment on their research findings. During the show, Rosenbaum spoke with a black man of Caribbean descent who had a white girlfriend. When looking for housing on his own, he told Rosenbaum and Friedman, he was steered to poorer neighborhoods; when his girlfriend joined him, however, they were steered to more affluent areas.

Such racial steering, Rosenbaum said, is illegal but infrequently prosecuted because the onus is on the victim to prove discrimination, and that can be a long, drawn out process.

“Segregation starts on a very personal level,” she said. “If fair housing legislation was more easily navigated, enforced or strengthened—so that real estate agents didn’t know they could get away with it—then it wouldn’t happen as much.”

In the meantime, Rosenbaum said that America’s racial segregation is liable to be made worse in the coming decades if demographictrends continue.

“Without changes,” she said, “the future of racial inequality will increasingly isolate blacks from all other groups.”