skip to main content
Return to Fordham University
You are at:Home»Inside Fordham»Professor Tells of English City That Never Was

You can learn a lot about a city by looking at what it could have been, according to Guy Ortolano, Ph.D. 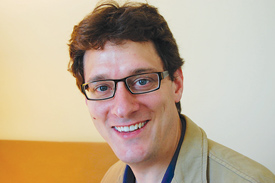 An assistant professor of history at New York University, Ortolano painted a picture of such a place in a lecture on the Lincoln Center campus.

He told the story of North Bucks New City, which urban designers planned to build about 50 miles northwest of London in the 1960s. The city was part of a larger strategy to disperse England’s urban population after World War II.

Ultimately, however, North Bucks New City was shelved in favor of another planned city, Milton Keyes, which rose in the same location.

“There is much that we can learn from cities that were never built, not only about how the future was imagined, but also how the present was managed, the opportunities that beckoned, the obstacles that threatened and the strategies that were available,” Ortolano said.

North Bucks New City was the brainchild of Fred Pooley, the county architect for Buckinghamshire. Pooley proposed a city with 50 villages of 5,000 people each, with the villages arranged like a pair of dragonfly wings.

The centerpiece of North Bucks New City was to be a monorail located no more than seven minutes’ walk from any house.

Constructing a city from scratch may seem outlandish now, but as Ortolano noted, at the time the British government was building a mile of highway every two weeks—a pace that would last for a decade.

“These ideas were to be fantastic, even futuristic, but I want to emphasize that in the 1960s, they were by no means otherworldly or even eccentric,” he said.

Planners in the 1960s envisioned a future in which affluence and automation resulted in an excess of leisure time, with the average work week reduced to 20 hours.

Filling this void, it was assumed, would be shopping—especially for women. The city’s dragonfly layout would provide big enough plots for privacy, and its most prominent feature, the monorail, would give them an easy, safe way to get to stores.

Ortolano also pointed out that it was believed that social problems could be alleviated by properly designed spaces.

“The designed environment could nurture strong social relations and provide attractive housing as well as useful amenities, but their most innovative way to address the question of social delinquency was through the cultivation of recreational shopping,” he said.

Seen from a larger context, the planning for North Bucks was part of a project for postwar Britain that was seeking to revive its stature in the world. But while it re-imagined urban transport, it did not re-imagine urban living.

“This vision, with the monorail at its center, was both futuristic and conservative. Futuristic, because it imagined coming ways of living; conservative because it sought to imagine them along familiar lines,” he said.

“British New Towns and the Unmaking of Mid-Century Modernism” was the plenary lecture of “Cities in History: Urban Identities Reconsidered,” a day of panels and discussions on Sept. 17. The event was sponsored by the Graduate School of Arts and Sciences, Office of Academic Affairs, Department of History, Center for Medieval Studies and the Urban Studies Program.