skip to main content
Return to Fordham University
You are at:Home»Faculty Profiles»Professor Taps Lifetime in Art to Teach, Inspire and Create

Richard Kalina, professor of art and former chair of the theatre and visual arts department, was admitted to the National Academy of Design in June—42 years and 21 solo exhibitions after he began his professional career. 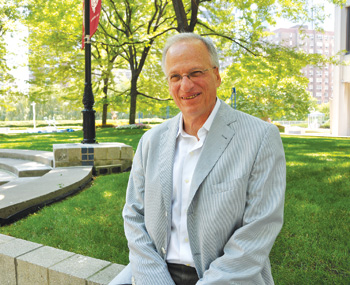 Richard Kalina has been a contributing editor at Art in America since the 1980s.
Photo by Patrick Verel

Kalina, who has shown his work at the academy’s annual art show, said he was thrilled to be included among such luminaries as Jasper Johns and Maya Lin.

“It’s one of the highest awards for artists and architects, so I’m very pleased to have been singled out for this,” he said.

When it comes to art, there are figuratively three Kalinas—the creator, the critic and the teacher, and each informs the other.

To get a feel for his art, simply visit the atrium on the ground floor of the Lowenstein Center, where Alba Pompeia (1995), a colorful and playful 65-inch diameter collage of acrylic and flashe on canvas, is on permanent loan.

His current pieces try to simulate—in a metaphorical way—the feeling of looking at and processing scientific information, particularly astronomy and information theory. To accomplish this, Kalina uses a form of collage that is very labor-intensive. He paints transparent rice paper with transparent colors and then rips the paper into smaller pieces and layers them on top of each other. The overlapping colors create a darker edge that is reminiscent of a brush stroke.

“My work has an underlying or an overlaid grid, which locates it spatially and adds a reference to the picture plain,” he said. “It also speaks to the long history of modernism, which has a kind of gridded understructure—particularly the modernism that flowed from cubism.”

Kalina compared the state of art today to a 40-page diner menu. While it can be dizzyingly large, it also is exhilarating because the possibilities for inspiration are endless, even if the work you find yourself looking at is flawed.

“Often art that is not particularly great can be the most inspiring, because sometimes if you’re faced with really terrific art, it closes itself off, and you say to yourself, ‘Well, I know I can’t top that,’” he said.

As a critic, Kalina is a contributing editor at Art in America, where he primarily writes about art from the 1950s through the 1970s. He is especially interested in abstract expressionism, pop art, minimalism and post-minimalism. In fact, he edited Imagining the Present: Context, Content and the Role of the Critic (Routledge Press, 2006), a collection of essays by Lawrence Alloway, who coined the term “pop art.”

Kalina said writing about the past helps to place him in the present and encourages a certain necessary humility.

“It’s very important in making art not to have it be too clever,” he said. “I am most comfortable with art that is intelligent but doesn’t feel intellectual. There’s a lot of art that says, ‘Oh look how smart I am.’ I find that to be a bit problematic.”

As a teacher, instructing students in art history and studio art helps Kalina because it forces him to explain himself, he said.

In addition to teaching artistic technique, Kalina said educating his students in methods of analysis is vital to their success. They must grow accustomed to critiquing their own work, because while feedback is plentiful in school, people are more likely to ignore an emerging artist’s work after graduation rather than criticize it.

“Teaching allows you to close the gap between looking, making and explaining,” he said. “It allows you to be more precise without nailing everything down, because you can’t just tell your students what they have to do, or what is the proper interpretation of something.

“You can only create the boundaries for understanding—a kind of borderline—and then have the meaning coalesce in between that. Students basically have to find out this stuff for themselves. They have to put it together—both in art history and in art.”

Teaching is also gratifying because even if a student isn’t planning on a career in the arts, he or she can learn quickly how to speak the language of modern art relatively easily.

If you study beginning Italian or French, you wouldn’t have a lot of success reading Molière or Dante. But if you spend a semester learning about modern art, you’ll go to the Museum of Modern Art or any other museum, and so much of what you see will be familiar and understandable, he said.

“I’ve seen this for years, and it’s immensely satisfying. I’ve heard many students say, ‘I was with my friends and I told them all about this stuff, and they were fascinated.’ So you get them to teach others. It’s an infectious process.”