skip to main content
Return to Fordham University
You are at:Home»Inside Fordham»Faculty Reads»Professor Studies Differences Between Facts, Opinions and Beliefs 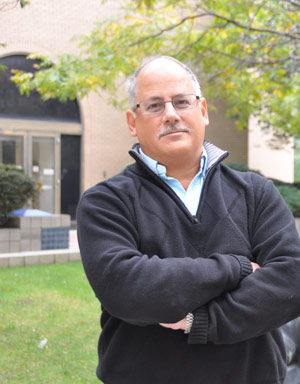 Mitchell Rabinowitz, Ph.D., found that when people weighed in on the veracity of statements that require unique knowledge, they often differed on what was a fact and what wasn’t.
Photo by Gina Vergel

What does the average person consider a fact? And when is something an opinion or a belief?

Professor and chairman of the psychological and educational services division in the Graduate School of Education, Rabinowitz found himself baffled by how often candidates used the phrases, “The fact is…” or “It is a fact that…”. He wondered how people were interpreting such statements.

But do these lessons lead to a set definition of a fact?

Not really, as Rabinowitz found.

“The assumption within the curriculum is that a fact is a well-defined concept, but what my research shows is that a fact is a very fuzzy concept,” he said. “There is very little consensus among people as to what is a fact versus a belief, or what features define a fact.”
Rabinowitz conducted studies to determine how people gauged facts versus beliefs. He gave his subjects simple statements and asked them the following three questions:

• How much do you think this is true?
• What proportion of the population do you think would think it was true?
• Is it a fact or belief?

Rabinowitz came up with six rules for his subjects to use when rating statements as facts or beliefs:

“So if we gave general statements such as, ‘A dog is an animal,’ or ‘The colors of the American flag are red, white and blue,’ or ‘Sleeping with the window open is good for you,’ people were pretty good at distinguishing facts from beliefs, and they were pretty consistent in terms of what they consider to be a fact versus a belief,” Rabinowitz said. “A fact is this very narrow type of entity and that’s what we expected.”

But when Rabinowitz expanded his study to include statements about academic disciplines, such as psychology, biology and history, the results differed.

“For beliefs, people moved their ratings more to the ‘I believe and other people should believe it also.’ And even though people were saying something was a belief, they were more likely to think it was true compared to the baseline items,” he said.

Findings differed from discipline to discipline, and even within disciplines. For example, if the statements were about the psychology of memory, a consistent number of items pertaining to that subject area were categorized as facts.

Despite the variations in academic disciplines, Rabinowitz found that even though participants classified statements as beliefs, they were still likely to say they believed the statements to be true.

In this stage of the research, Rabinowitz found more breadth in what was considered a fact.

“Before, a fact was something you thought was true and you expected everyone else to think was true. In academic areas, a fact is something someone thinks is true, but others may or may not think is true,” he said. “This is due to people’s lack of knowledge about academics. They may think, ‘I know it’s a fact, but some people don’t know about this. Other people may not have this knowledge of the discipline, so even though I think it’s a fact, they might not agree with it.’”

Also with politics, the majority of statements were rated as beliefs, Rabinowitz said.

In other words, even when rating a statement as a fact, people were also very likely to add that they didn’t think the fact was true.

“We looked to see whether there was consensus as to which statements were facts and which were beliefs,” he said.