skip to main content
Return to Fordham University
You are at:Home»Faculty Profiles»Professor Strives to Make Marketing Work for Everyone

If you discovered that the one-pound bag of coffee you normally buy at the grocery store had been reduced to 11 ounces, how would you react? 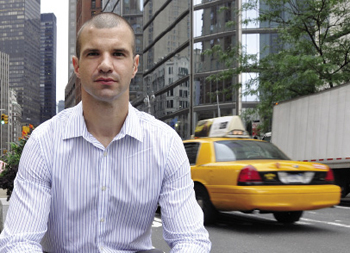 Luke Kachersky, Ph.D., seeks to return the field of marketing to its roots as a socially beneficial endeavor.
Photo by Patrick Verel

Luke Kachersky, Ph.D., said he can predict your response if he knows your Persuasion Tactic Pricing Knowledge (PTPK) level.

Kachersky, an assistant professor of marketing, reported such findings in “Reduce Content or Raise Price? The Impact of Persuasion Knowledge and Unit Price Increase Tactics on Retailer and Product Brand Attitudes,” which is slated for publication in the Journal of Retailing.

“When people with high PTPK saw a decrease in the product amount, they were more likely to suspect they were being tricked and that the company was trying to make more profit,” he said.

“They wouldn’t think, ‘The company’s costs must have gone up, so they’re trying to keep the retail price steady,’” he said.

On the other hand, if the amount remains constant but the price increases, people with low PTPK are more likely to blame the store but not the coffee maker.

“Because they have less understanding of how distribution works—or marketplace pricing tactics in general—they tend to react to the entity that’s nearest to them, which is the retailer,” he said.

This parsing of the psychology of pricing constitutes roughly half of the research that Kachersky has pursued since joining the Fordham Schools of Business in 2008.

He also explores the influence of self-concept in consumer judgments, most recently in “Do Moniker Maladies Afflict Name Brand Letter Brands? A Dual Process of Name Letter Branding and Avoidance Effects,” which appeared this year in the Journal of Experimental Social Psychology.

In that study, he wanted to know how first letters in product names affected consumers. While prior research found that people named Denise have a greater propensity to subconsciously choose Dove chocolate and live in Denver, Kachersky found that sometimes name letters can drive people away. For example, someone with the last name Sheen might consciously deny being related to the self-destructive actor with the same name.

“First, I looked at whether buyers on eBay tended to pair up with sellers based on common first characters in their screen names. I found that it happened, but I also found something odd. When the prices of items grew out of sync with their perceived values, buyers started to separate from sellers based on that same characteristic,” he said.

“When you’re operating in a transaction environment such as eBay, there is an element of risk. As a buyer, you might think, ‘That person on the other end could be fraudulent.’ At a subconscious level, if the seller has the same name letter as you, then you want to avoid an association with him or her.”

Kachersky understands that many people regard the field of marketing with a degree of cynicism. As the project coordinator for the Center for Positive Marketing at Fordham, he is determined to return marketing to its roots as an inherently positive phenomenon.

“Many people who call themselves marketers clearly are a nuisance to consumers. Marketing is supposed to provide value to customers; it’s supposed to help them solve a problem or satisfy a need,” he said. “The center approaches marketing from that perspective and promotes it.”

The center is hosting the Conference for Positive Marketing on Nov. 4, where it will unveil a new initiative called V Positive, Kachersky said. V Positive complements other indices that measure the dollar value of brands, such as Millward Brown’s Brand Z.

“V Positive will fill that void. It will tell us the extent to which—and exactly how—companies are impacting people’s lives.”

To do that, brands will be measured in several categories and receive a number that indicates their impact on people’s lives.

“Because we can drill down these numbers into separate categories, companies can pinpoint where they need to pick up the slack and where they can make a difference. It will show them where people feel they need improvement.”

Kachersky doesn’t underestimate the difficulty of truly positive marketing. No one company does it best, although Amazon.com’s frustration-free packaging is a good example.

“Amazon solves a problem for customers because it has eliminated the frustrating experience of trying to open the product,” he said.

“As a result, customers are more willing to shop with Amazon. So you have a win for the consumer, a win for the marketer, and then because you’re not using plastic, you can recycle the packaging. It’s a win for everybody.”