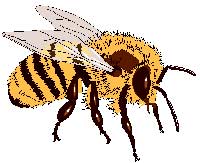 “The scout bees will dance
more enthusiastically for the
better sites, and they will
debate for two days,
visiting the site and
returning to the swarm
to dance for it repeatedly to
encourage others to visit.

Choosing the right home can be a daunting task, especially if it must hold 10,000 inhabitants. But homeless honeybees choose a new nest with efficiency, or “swarm smarts,” according to Thomas D. Seeley, Ph.D., professor of neurobiology and behavior at Cornell University and author of a study on the bees’ decision-making.

Seeley’s research, presented at a Department of Biology colloquium on Jan. 17, shows evidence that bees rely on a quorum, rather than a consensus, to choose a new nest, and that scout bees build that quorum by doing a “waggle dance” for the rest of the hive once they are enthusiastic about a particular site. The waggling indicates the direction of the site and the duration of the waggling indicates its distance. Waggles can last up to ten minutes, he said.

“Bees are quite choosey about the tree cavity they live in,” Seeley said, noting that the ideal bees’ nest should face south, be high and have a small entrance for thermal regulation. “The scout bees will dance more enthusiastically for the better sites, and they will debate for two days, visiting the site and returning to the swarm to dance for it repeatedly to encourage others to visit. Ultimately, enough scout bees snowball at one site so that they vastly outnumber the others. And time and time again, they go for the best site.”

In order to test the bees’ “quorum sensing,” Seeley set up a mix of mediocre and superb nest sites on Appledore Island in the Gulf of Maine, and measured how long the scout bees, which consisted of only 3 percent of the swarm, took to make a decision on a final nest. In one experiment Seeley delayed quorum building, and in another he did not interfere with it. Both experiments showed strong evidence that the heart of the bees’ decision-making is the moment when there is an accumulation of a “threshold” number of bees at one site, i.e., a “quorum,” which can be as few as 15 scout bees out of a swarm of 4,000.

The study, he said, has implications for human decision-making. He said using quorum sensing:

• reaches an aggregate opinion with both speed and surprising accuracy.

“Bees can teach us how to reach an optimal choice of action for the whole group. Brainstorm. Take your time,” he said. “One way I apply this to my departmental meetings is by using ballots instead of a show of hands.”

Seeley said that many groups, such as the Quakers, still prefer to rule by consensus.

“But sometimes they have to wait until a member dies to get a decision,” he said.

Seeley, who has been researching bees since 1975, said that the advancements in video technology in the last two decades has helped further his research on the waggle dance. His findings were published in the May-June 2006 issue of American Scientist.