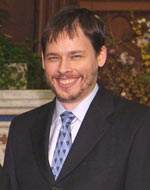 George Demacopoulos, Ph.D., assistant
professor of theology, is co-organizer of the international conference, Orthodox Readings of Augustine, to be held June 14 to 16 at Fordham University.
Photo by Leo Sorel

Demacopoulos, who in 2004 played an instrumental role in the return of treasured Christian relics seized by crusaders 800 years ago, traveled to Turkey during the papal visit as a guest of the American contingent of the Archons of the Ecumenical Patriarchate.

“The relationship is significantly better than it was, say, 60 years ago,” Demacopoulos said. “[The improved relations] have been part of an ongoing process and the return of the relics a few years ago, the visit by John Paul II and now the visit by Pope Benedict have certainly sustained that process.”

Pope Benedict’s four-day visit to Turkey was a milestone in a number of ways, marking only the second time a Pontiff has visited a mosque. He also announced his support for Turkey’s bid to join the European Union, which he had opposed as Joseph Cardinal Ratzinger.

Much of the press coverage (there were 3,000 journalists accredited to cover the visit) focused on his meeting with Islamic clerics and his message of reconciliation with the Muslim world, but Demacopoulos said that the Pope’s visit was initially designed to draw international attention to the plight of the Orthodox community in Turkey.

In fact, he said the visit was timed so that the Pontiff could mark the feast day of St. Andrew the apostle, who preached across Asia Minor and who is said to have ordained the first bishop of Constantinople, now known as Istanbul. Pope Benedict has made it a priority to reach out to the world’s more than 250 million Orthodox Christians and heal the breach between Catholicism and the Eastern Orthodox Church that dates to the 11th century. He would like to unify the two churches, which split over the issue of papal authority.

Demacopoulos said that this is a difficult time for the Orthodox Church in Turkey because its population has been dwindling for decades, and is now down to fewer than 3,000. In addition, the government has seized much of its property and shuttered its seminary, even though the law requires that the patriarch of Constantinople be Turkish born.

The Orthodox Church supports Turkey’s effort to join the European Union. If admitted, the Orthodox community in Turkey would be able to appeal property seizures to a European court, he said, and by increasing ties with Europe it is believed that the Orthodox Church would experience greater religious freedom.

During the visit, the Pope spoke out for greater freedoms for religious minorities in Turkey.

Demacopoulos believes that complete unity of the two Christian branches is unlikely in the near term. However, the two churches can—and likely will—work together to speak against issues like poverty, violence and intolerance.

In 2004, Demacopoulos was asked by the Orthodox Church to document how the relics of patriarch Saints John Chrysostom and Gregory Nazianzen, two of the most important church fathers in Orthodox tradition, came to reside in St. Peter’s Basilica. He wrote a request on behalf of Ecumenical Patriarch Bartholomew I to have them returned to Istanbul, and Pope John Paul II agreed.