skip to main content
Return to Fordham University
You are at:Home»Inside Fordham»Professor Recounts One Jesuit’s Quest to Clean Up Corrupt NYC Docks 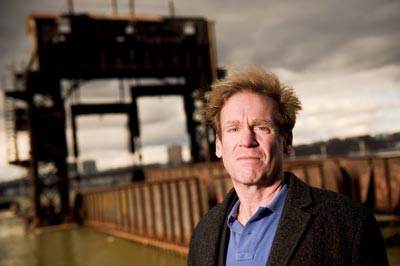 James Fisher, Ph.D., tells the story of the Irish waterfront in the 1930s and 1940s.
Photo by Ryan Brenizer

The world of New York City Irish longshoremen in the 1940s was reputed to have been a mire of extortion, kickbacks, bribes and dead bodies that surfaced in the river each spring.

That is, before a Jesuit reformer named John “Pete” Corridan, S.J., came along.

James Fisher, Ph.D., professor of theology, has written a book about Father Corridan, On The Irish Waterfront: The Crusader, the Movie and the Soul of the Port of New York, to be published next year by Cornell University Press. It documents the unlikely struggle between an Irish-American Jesuit and the forces of politically corrupt bosses, politicians and a religious establishment that often looked the other way.

“The waterfront in the early 20th century was an unbelievable world, and the Irish immigrants dominated it,” said Fisher, who teaches about Father Corridan in a course on American religious history.

“Everything shipped from the heartland of America had to terminate in the New Jersey freight yards. The absence of a rail tunnel for freight meant all goods destined for New York City were transferred to barges or ‘car floats’ for shipment across the Hudson, an unwieldy process that gave enormous power to the people with control of the loading and unloading on both sides of the river,” he said.

In the 1930s and 1940s, that power disproportionately lay with Bill McCormack, a waterfront entrepreneur who controlled the stevedoring business for the Pennsylvania and Erie railroads, the metropolitan area’s largest shippers. Not only did McCormack control the transport business, he also ran the International Longshoremen’s Association (ILA)—the worker’s union—and therefore dictated its contract terms.

“Within days, the combined power of the archdiocese, Tammany Hall and even the New Dealers in Washington came down on him,” Fisher said. “They told him, ‘This isn’t how we do business around here.’”

In the days of the Irish waterfront, members of the local archdiocese embraced a notion of Christian realism—understanding that the world God made could be brutal and violent, Fisher said.

“People on the waterfront kept their mouths shut,” Fisher said. “Their ideology was that they didn’t want their children to have to live the way they did, and that memory of having been oppressed and despised as immigrants made the Irish waterfront unbelievably tribal. Their parishes supported that ideology.”

A conflict developed between the reformist Jesuits and other Archdiocesan figures, Fisher said. Into that conflict stepped Father Corridan, in 1946, to lead the effort to clean up the docks.

“Corridan was kind of a brooding loner who didn’t care about being pastoral,” Fisher said. “He was ideal for this very bruising waterfront apostolate.”

Father Corridan immediately saw the futility of trying to work with the powers that be. Reformist clergy who spoke out were ostracized, and dockworkers or politicians who made trouble could end up at the bottom of a river. As many as 200 longshoremen “disappeared” between the two World Wars, said Fisher, and nobody was ever convicted of killing a longshoreman until 1948.

So Father Corridan went outside the closed world of the waterfront. He contacted Malcolm Johnson, a southern Protestant and a reporter for the New York Sun. Johnson’s series on the rampant corruption on the docks, “Crime on the Waterfront,” won a Pulitzer Prize in 1949 and led to public hearings.

“Between 1949 and 1954, Corridan dealt with hundreds of people in the media on waterfront issues that had previously been too daunting,” Fisher said. “He became a guide, an interpreter for that world.”

Corridan and Schulberg had high hopes that the movie would help break the Longshoremen’s hold on the docks.

But in a crushing defeat, the insular Irish dockworkers clung to their rank and file; even though investigations had led to the demise of corrupt political leadership, the ILA remained the union of choice, beating the AFL in elections. Having fought and lost his hopes for a new union on the waterfront, Father Corridan relocated to a position at LeMoyne College. Eventually, he became a hospital chaplain. He died in 1984.

Fisher, a New Jersey native, grew up a stone’s throw from the Hudson River cargo docks. His interest in the waterfront grew out of his fascination with the huge steel containers that lined the docks of Bayonne in the 1980s. The new technology led to the demise of the era of the Irish waterfront. Between 1953 and 1980, the population of dock workers dwindled from 60,000 to just a few thousand, as the high-tech steel containers replaced the old, break-bulk cargo loaders, he said.

Because the mired, complex story of the Irish waterfront offers a rich source for religious history in America, Fisher takes his students to the Hudson River dock site to lecture on Father Corridan. As part of the University’s freshman Integrated Learning Community, Fisher acts as faculty liaison for the Corridan Floor in McMahon Hall on Fordham’s Lincoln Center campus. He recently brought On the Waterfront to the floor to help students understand the full import of Father Corridan’s mission.

In bringing together Catholics, Jews and Protestants to fight corruption on the docks, Fisher said Father Corridan accomplished something unique: “He laid the groundwork for everything we know today as Catholic interfaith, ecumenical social justice work.
“
And Budd Schulberg, to this day says, ‘Who was Pete Corridan? It was simple. He was the first liberation theologian,’” Fisher said. “And Budd is right.”