skip to main content
Return to Fordham University
You are at:Home»Inside Fordham»Professor Mines History to Show How Americans Create Conceptions of the Past 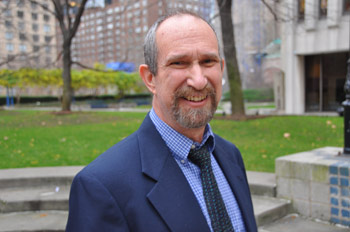 Barry Goldberg, Ph.D., says that while early members of the American labor movement compared their situation to that of slaves, many were explicitly racist.
Photo by Patrick Verel

The Declaration of Independence includes the phrase “All men are created equal,” but ideas about the meaning of equality and the boundaries of American freedom have changed much since 1776.

As those changes have occurred— first through the emancipation of slaves and then through the women’s rights, labor and civil rights movements—Americans have struggled not only to shape their future, but to reinterpret their past.

For Barry Goldberg, Ph.D., associate professor of history at Fordham College at Lincoln Center, a rich example of this is how American wage workers and their advocates in the late 19th and early 20th centuries talked about slavery. As the age of industrialization emerged, Goldberg said, people began to ask new questions about issues such as equality, liberty, freedom, justice and what constituted a fair day’s work.

Aware of the bloody cost of what Abraham Lincoln called America’s “new birth of freedom,” they were still grappling with the ideological legacy of racial slavery as they engaged with the new discipline of the assembly line and new patterns of social inequality.

In particular, he said, when discussing ways to better their working conditions, labor activists often compared the plight of white wage earners to that of black slaves and their struggle to the movement to abolish slavery. They mobilized words and images drawn from black bondage, the anti-slavery crusade, racist defenses of chattel slavery and the Civil War to redefine democratic freedom in industrial America.

“They made very explicit analogies,” Goldberg said, “like, ‘We feel the whip of starvation as harshly as the slave felt the whip on the back.’

“That is a vivid way to express the sense of grievance felt by an entire class,” he continued. “But it appropriates the experiences and memories of African Americans who endured slavery and uses them for a new purpose.”

Analyzing how the labor movement co-opted and reapplied the imagery and language of slavery and is part of a larger field of study on the memory of the Civil War. Goldberg, who received a faculty fellowship last spring, is investigating “Race, Class and Reunion: American Labor and the Left Interpret Slavery, the Civil War and Emancipation,” which he expects will result in a lengthy book.

“But ever since then, Americans have been verbally re-fighting the Civil War. The interpretation of the war itself still goes on in novels, magazines and movies.”

Unlike the artists who created works such as Birth of a Nation and Gone With the Wind, labor leaders’ ideas about the war have received little scholarly attention. For Goldberg, “rank-and-file” letters to the editor from labor newspapers are a particularly vibrant source for study.

“I was struck by a mine worker who wrote, ‘The only way we’re going to win our freedom is to pick up the gun. After all, slavery wasn’t abolished because of sweet talk. It required a shot,’” Goldberg said.

“Someone else wrote back, and was sympathetic, but said, ‘You’re a fool. That’s not going to work.’ So there was no unanimity.”

Goldberg has discovered that workers disagreed on whether the elimination of slavery was an isolated development or part of a larger movement toward human dignity. Lincoln, some said, would have been a socialist had he been alive in the early 20th century.

Always in the background, he noted, was the question of what workers really thought about African Americans and slaves.

“Often, workers would say that their conditions as wage earners were worse than those of a chattel slave. A chattel slave, they said, was clothed and housed, and the master had a stake in treating him well,” Goldberg said.

“Many of them bought into this paternalist image of slavery and the racial inferiority of the slave.”

The point of doing this kind of research, Goldberg continued, is to abandon the habit of isolating the histories of different groups, as if American society were merely a composition of individual fragments.

“Certain topics, such as slavery and the Civil War, were relevant to people whom we wouldn’t normally associate with the battle between white supremacy and racial equality,” he said. “Why would a white second-generation Welsh coal miner be concerned with William Lloyd Garrison?”

Goldberg said that question is central to writing the history and shaping the future of a society in which it is impossible to disentangle issues of race, ethnicity, class and gender.

Goldberg values the unique pain that groups such as African Americans or East European immigrant steelworkers have experienced. But he also espouses the value of viewing history “at the points at which members of different communities confronted one another in workplaces, and in their historical imaginations.”

As an exercise, he asks students to spell the word “roots.” They usually respond “R-O-O-T-S” even though it can also be spelled “R-O-U-T-E-S.”

“When we study pluralism in the United States, we should pay more attention to the routes,” he said. “The word ‘roots,’ in a certain sense, ties you to a fixed place. It suggests you can’t go too far or you risk, somehow, destroying yourself.

“But think of the openness that is implicit in the alternate spelling. ‘Routes’ doesn’t deny your connection to the journey of your ancestors,” he explained. “Instead, it implies that the journey is one that you are continuing. As in the past, you will repeatedly cross paths with ‘others’ at dangerous and invigorating historical intersections. I like to think we can get better at it.”